The Glasgow Defence Campaign has received the following report from a Scottish Socialist Youth supporter. 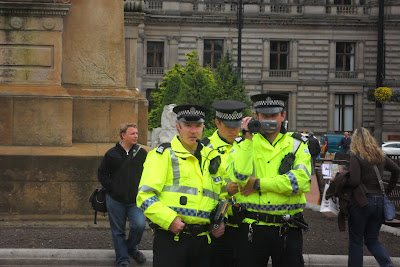 Police evidence gathering team in George Sq on Saturday
Organisers of an anti sexual violence demonstration in city centre on Saturday 4 June are facing possible charges after Strathclyde Police reported two individuals to the Procurator Fiscal for what they claim was an 'unauthorised' march. This follows a huge police operation which was mounted on the day of the 'Slutwalk', which saw around 200 mostly young people taking part in a completely peaceful march against rape and victim blaming, in light of recent comments by various Tory politicians on the matter.
Ahead of the demonstration, the organisers had sought co-operation from both Glasgow City Council and Strathclyde Police, even going as far as shortening and altering the route of the march, and changing its end location. Despite this, two organisers have now been reported to the PF.
The huge police operation mounted on the day of the march saw several police vehicles, up to six mounted officers, CCTV vans, an evidence gathering team with a handheld camera, a helicopter and a number of plain-clothes officers in attendance. This was a huge overreaction to a demo that had never been billed as anything other than a peaceful march, which consisted mostly of young women on their first demonstration.
However, the police clearly saw it as an excuse for an exercise in intimidation and intelligence gathering. A large police presence remained in Glasgow Green well after the rally had finished, with plain-clothes officers visibly scrutinising the attendance at the demonstration, attempting to pick out known activists within the crowd. It is understood that officers inside police vehicles had 'spotter cards', containing photographs of such activists. As people began to drift away, a young student activist was accosted by two plain-clothes officers as he visited a newsagent, and his details were demanded under Section 13 of the Criminal Procedure () Act, as a potential witness to a crime, the nature of which they did not specify despite a legal requirement to do so.
Similar tactics were used to gain the details of an individual at the picket of police station on Thursday, following police violence and two arrests at a anti-cuts protest. Again, the protester was picked off by plain-clothes officers as he visited a shop, away from the mass of the demonstration.
In charge of police operations at both Saturday and Thursday's demonstrations was Superintendent Nelson Telfer. Following Thursday's demo, he appeared in media coverage claiming that the protest was "hijacked", and promising further arrests. As the past few months have shown, when it comes to arrests and subsequent bail conditions, the police are picking their targets first and then later coming up with whatever charges they can fit. Officers made it clear in April, whilst making a round of arrests over student demos in December, that they had a 'list' of targets for arrest.
Their aim of derailing and intimidating the emerging anti-cuts movement in the city, by targeting prominent activists in whatever way they can, could not be clearer. Even where good relations have been sought - such as in the organising of the Slutwalk on Saturday - the police have responded by looking to press charges against individuals involved, and in an obvious bid to set an example to organisers of other demonstrations. Everyone involved with the anti-cuts movement in must remain vigilant in the face of these attacks.
Posted by Miriam at 15:21