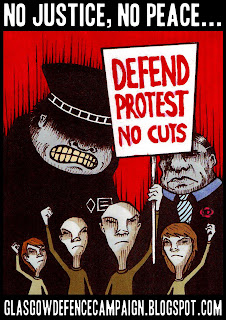 The Glasgow Defence Campaign is once more calling on all supporters of the anti-cuts movement and democratic rights to attend a protest outside the trial of Fight Racism! Fight Imperialism! (FRFI) supporter Joey Simons on Tuesday 23 August. Hundreds took part in the demonstrations on 9 December in Glasgow on which two FRFI supporters were targeted and arrested by Strathclyde police.
The GDC and FRFI haver consistently fought to oppose the attacks on anti-cuts activists by both the courts and the police, and offered our solidarity to all those who have faced harassment for their political activity. We urge and demand that all progressive forces stand with those protesting outside Glasgow District Court tomorrow calling for the charges to be dropped as not in the public interest. Only through protest and public campaigning can we apply any form of scrutiny and accountability to the 'justice' system. Recent events in England have shown the viciousness with which the courts of the ruling class can act. We cannot allow any member of the anti-cuts movement to face isolation and criminal charges. As Strathclyde police continues to arrest ever increasing numbers of activists, 'An injury to one is an injury to all' must be the principle on which we fight.  All out for the Glasgow District Court!
Drop the charges now! Stop the political attacks!
Protest outside Glasgow District Court from 10am,
21 St. Andrews Street, off Saltmarket
Glasgow Defence Campaign
Monday 22 August, 13:00
Posted by Miriam at 05:39