‘The law is simply and solely made for the exploitation of those who do not understand it or of those who, for naked need, cannot obey it.’ Bertolt Brecht
Over one year of relentless campaigning by the Glasgow Defence Campaign was vindicated today as Fight Racism! Fight Imperialism! supporter Joey Simons was found not guilty on all five charges relating to his arrest on an anti-cuts demonstration on 9 December 2010. Through twelve months of court appearances, and a trial lasting four days, the Crown office was unable to spin the shameless lies of Strathclyde police officers into a web of deceit sufficient to secure a prosecution by Sherriff Kerr. Cops lined up one after another to perjure themselves in front of the court, their ‘evidence’ concocted in concert and dutifully despatched; their well-rehearsed stories of rescue attempts, ‘threats to officer safety’, conspiratorial leaders, and ‘frantic’ crowds repeated again and again.
Fortunately, their contempt for the truth was matched only by their incompetency and idiocy, and in the end the police were undone by their wilder fabrications, systematically disproved by the defence team. Today has been a welcome humiliation for the officers, sergeants and chief inspectors of police station, and one they will not forget in a hurry. We in turn shall not forget the individuals responsible: PC’s Grant Hay, Douglas Forrest, John Carter and PCs Scott and Quinn.
Speaking outside the court, Miriam Kelly, a spokesperson for the Glasgow Defence Campaign, stated that the victory was ‘a significant setback for the attempts to criminalise political protest being led by the Crown Office and Strathclyde police. Throughout the past year we have stood firm inside and outside of these court rooms in order to assert the right to protest and organise in the face of the cuts and attacks on the working class. The criminals in this case are all those officers who chose to perjure themselves – and yet none will face consequences for doing so. We would ask what type of justice system is this when such abuses of law go unpunished?’
As the verdict was read out in , the brutality of ruling class justice revealed itself in as two young teenagers, pleading guilty to breaches of the peace, were sentenced to three years imprisonment for posting messages on Facebook regarding a riot that never existed. This is the reality which we must face. The pleasantries of liberalism are being dispensed with long before any serious challenge to austerity emerges; the maxim of General Frank Kitson that the ‘genuinely subversive elements’ must be ruthlessly isolated before they become effective has not been forgotten. The machinery of state repression is carefully designed and well-oiled, and can be turned on or off at will. Today proved what the GDC has been clear about from the start: the only way to meet political attacks is through a political defence.
Such victories are only won through unity and solidarity, and the GDC would like to place on record our sincere thanks to our solicitor and the dozens of supporters who have stood by us in recent days and months at countless court appearances. In particular, the Revolutionary Communist Group, Save the Accord campaign, Scotland Against Criminalising Communities, individuals from the Scottish Socialist Youth, the Glasgow Palestine Human Rights Campaign and other non-aligned activists. Nevertheless, the time has come for us to state publicly that for all the rhetoric about defending the right to protest, the left has singularly failed in its most basic of duties. It is necessary to name names: the Socialist Workers Party, the International Socialist Group, the Communist Party, the Scottish Socialist Party…all have failed to attend a single court picket in a conscious and deliberate boycott of the GDC. This refusal to support the campaign leaves others open to attack. We are moving into a dangerous period where such sectarianism has no place, and we hope to work with all progressive forces in the future.
To the Crown Office and Strathclyde police we say this: any attempt to interfere with our rights and criminalise us will be met with further defiance and resistance. These forces can expect the humiliation they suffered today to be repeated and the campaign will now be pursuing civil action against the police.
Defence Campaign
12 December 2011, 23:00 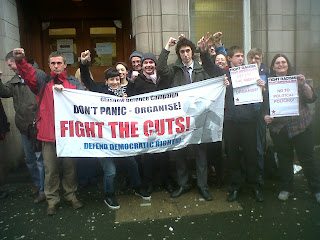