Police Hands Off The Green Brigade!

The Glasgow Defence Campaign would like to send our solidarity to the Celtic supporters group, The Green Brigade, who continue to be the target of Strathclyde police intimidation, harassment, arrest and court charges.

Attempts to silence the group through the criminalisation of progressive politics in football are not isolated from the events taking place outside stadiums. 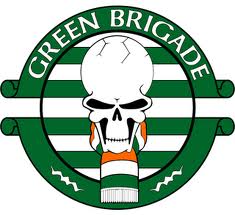 As people’s lives are destroyed, through the clawing back of basic welfare, the right to speak out is increasingly being attacked. On Friday 22 February two supporters of Fight Racism! Fight Imperialism! were arrested and charged on the monthly Glasgow Against Atos rolling picket. This related to the use of a megaphone in Glasgow City Centre. The targeting of groups like the Green Brigade and Glasgow Against Atos are a sign of things to come.

It’s essential that all progressive forces stand together.  Public unity, exposure and action is a means of defence. Solidarity court protests for those facing charges, the organisation of fundraisers to pay off fines, support for the families of people targeted, and effective public exposure of cases are all vital.

We must make clear to the police and the ‘elites’ who they serve that if they attack us they will be met with a united, public, organised and political response.

HANDS OFF THE GREEN BRIGADE!
UNITED WE STAND!
Posted by Miriam at 15:30