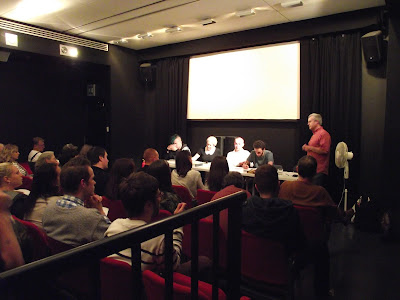 A well attended meeting in the centre of Glasgow saw Rob Evans - Guardian journalist and co-author of the new book Undercover: The true Story of Britain’s Police speak alongside criminal defence advocate Claire Mitchell and representatives from the Glasgow Defence Campaign and the N14 Defence Campaign in Newcastle.

Rob Evans spoke in detail of the activities of secret police units such as the original Special Demonstration Squad formed in 1968 up to today's National Domestic Extremism Unit; how they have monitored and infiltrated ‘subversives’ using fake identification, to the extent of stealing the names and identities of dead children; and just how deep these undercover operations have gone.

Claire Mitchell outlined the rights we have through the European Convention on Human Rights and the domestic Human Rights Act, suggesting that these rights are facing an increased political challenge which must be resisted. Claire stated that everyone has a duty to familiarise themselves with these rights and to exercise them is the best means of protecting them.

Niall O’Donnell, a member of Fight Racism! Fight Imperialism! based in Newcastle, stated that all those who engage in effective political campaigning in this country in opposition to the state will quickly become subject to criminalisation. Speaking on behalf of the N14 justice campaign, Niall outlined how he and 13 others were targeted and arrested for their role in opposing neo fascism with the complicity of members of the local Labour party and charged with ‘conspiracy to cause public disorder’. Through the successful campaigning work of the N14 all those arrested have been informed that no charges will be brought against them. But as Niall said: ‘we want answers. Someone has deliberately stirred things up. This is unacceptable behaviour and we will continue to fight against it.'

Joey Simons spoke on behalf of the Glasgow Defence Campaign detailing how the campaign was started and the varying levels of state harassment faced by the campaign, stating:

‘For the past three years, we have successfully organised – through free speech rallies, dozens of court pickets and demonstrations, through recording, monitoring and logging police harassment, through organising public meetings, literature and bust cards, through defying police attempts to ban our literature and our presence on the streets. Over half a million people have seen Dominic on Youtube providing Strathclyde police officers with a lesson in law on the streets of Glasgow. From the 18 or so various charges our members have faced over the past three years, we have plead not guilty to every one, and lost in only two cases. The presence of the Glasgow Defence Campaign has meant that the police must think twice before harassing protest and the Crown Office to think what really constitutes 'in the public interest.' We have shown that intimidation and criminalisation, far from driving people off the streets, only strengthens their determination. We ask people to get involved, to attend the court picket on 1 October and to become involved in the discussion. Those in power are learning quick, but we are learning quicker!'

The meeting heard many contributions from the floor, one woman asking the audience how many had been on the receiving end of police harassment and violence – over two thirds of the meeting raised their hands. Another important contribution noted that the revelations in the book confirm that far from being some rogue undercover unit, the entire process has been authorised by Whitehall and the Home Office itself.

Chair of the meeting Paul McKenna ended the meeting by stating that the Glasgow Defence Campaign is reorganising and appealed for support from those present and beyond: ‘there is an urgent need to organise as wide a public defence as possible for two of our supporters facing criminalisation for their part in the struggle against ATOS’, stating that the response to the state attacks on the new movement will be a disciplined and organised one. He called on the meeting to remember the principles of the GDC – Don’t panic -  organise!

Copies of the book - Undercover are available from the GDC priced £13 with free postage and can be obtained by donation via our paypal button.
Posted by Miriam at 14:39