Stand up for your rights! Street rally against polititcal policing. 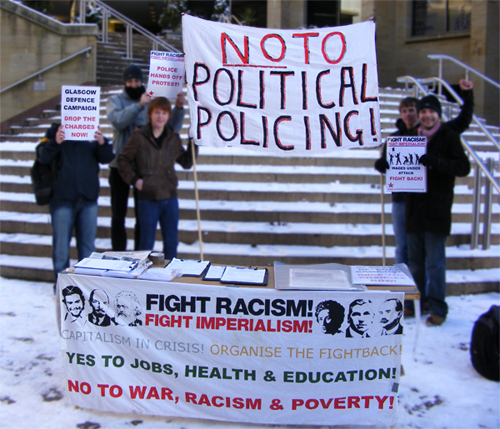 Glasgow Defence Campaign and Fight Racism! Fight Imperialism! supporters today (8 January) held a “Stand up for your rights” street rally in Glasgow city centre in defence of democratic rights and in opposition to political policing. On 30 December a supporter learned that he is facing criminal prosecution for selling the newspaper Fight Racism! Fight Imperialism! in Glasgow and is due to appear in court on 17 January 2011. We are clear that this citation is politically motivated and an open attempt to undermine our ability to organise against attacks on living standards in our communities. FRFI supporters have previously been charged by Strathclyde police for selling the newspaper and two are currently awaiting trial following their arrest on student demonstrations in the city last month.

The rally was a lively and militant event as over a dozen people took to the busy streets to raise awareness of growing police harassment in Glasgow and elsewhere. A large banner reading “NO to political policing!” was present throughout and an open megaphone allowed people to make their anger heard. As one young protestor made clear: “We do not have the wealth to circulate thousands of free newspapers across the country every morning but we are determined that our message is heard: we must defend our democratic rights or we risk having them taken away by the British state!” Another stated: “The establishment say that we are only out to cause trouble and destruction. Let us be clear: we are not the ones destroying already inadequate education, housing and health care; we are not the ones destroying peoples´ lives by cutting wages and benefits; we are not the ones who destroyed millions of lives in Iraq and Afghanistan! Those in power are the real troublemakers!”

In response to the intensifying state harassment, the Glasgow Defence Campaign and Glasgow FRFI have organised an open meeting on fighting the cuts and defending democratic rights. The past year in Glasgow has seen anti-fascists, Palestine solidarity campaigners, Republican activists and students all face police harassment, while in Edinburgh, three anti-cuts protestors have recently been picked up by police for participating in December´s student demos there. It is crucial that our political, organisational and legal experiences our shared for the benefit of all those active in progressive politics, and even more importantly, for those who are yet to take to the streets. All interested groups and individuals are invited to attend and speak.

Self defence is no offence!
All power to the people!

http://revolutionarycommunist.org/index.php/reports/scotland-reports/2024-stand-up-for-your-rights-street-rally-in-glasgow-as-third-frfi-supporter-charged.html
Posted by Miriam at 08:33