George Square: And the winner is...? 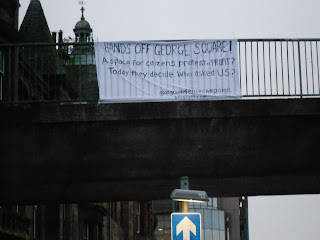 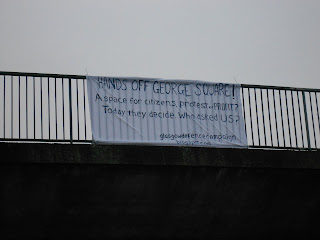 Today the winner will be decided! One thing is sure – it won’t be the people of !

Monday 12 November marks the day when the ‘winning’ design for the redevelopment of is decided. Not by the citizens of but by a select panel of private profiteers and self interested politicians, amongst others:

- Head of Glasgow City Council, Labour’s Gordon Matheson, a determined supporter of service cuts and wage freezes, the demolition of the Accord day care centre and personal enrichment

- Geoff Ellis, promoter of T in the Park, presumably brought on board for his astute knowledge of how to milk as much profit as possible from large crowds of people

- Neil Baxter (in observer capacity), the architect and advisor to notorious businessman Stefan King in ill-fated attempts to turn the Botanic Gardens into a nightclub

Are these the people we want deciding how to ‘redevelop’ ? We can only guess at how much time they will spend discussing the need for green space, free public use, ending the prostituting of the square for commercial use, its importance as a space for political protest…

As usual, the judging of the design competition seems to be taking place in secret, and the GDC was unable to uncover the location where the judging is to happen. Nonetheless, supporters of the GDC where up early this morning to drop banners at and let as many people as possible know what is happening to our city.

Now’s the time to get involved!

On Tuesday, the campaign will hold its next organising meeting, with a plan of action, protest and much else being discussed. There will also be protests outside the in support of a Glasgow Defence Campaign supporter facing trial for taking part in anti-cuts protest in January 2011. Hands off ! Defend the right to protest!

Tuesday 13 November, from 9.30am
‘Defend the right to protest! Drop the charges now!’
Demonstration outside , in support of GDC supporter Dominic O'Hara facing trial for protesting. Trial starts 10am.