Supporters of the Glasgow Defence Campaign gathered yesterday in the Sheriff Court to defend Dominic O’Hara standing trial on trumped up police assault and obstruction charges dating back to an anti-cuts protest in Glasgow on 29 January 2011. This was our post at the time of his arrest http://glasgowdefencecampaign.blogspot.co.uk/2011/01/breaking-news-another-frfi-activist.html 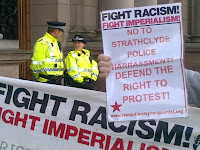 Now almost two years on the case has finally begun after a long delay owing to questions of whether the police kettle of the protest that day was a breach of European Convention of Human Rights legislation. The first police witness has given his evidence which due to the ongoing case the GDC is not at liberty to report all the details of.

‘We maintain that the criminal actions committed on the protest of 29 Januray 2011 belong to Strathclyde Police officers. The kettle of peaceful protestors and the vigilante style in which Dominic was arrested illustrates who the real danger to public safety was that day.  Our comrade has been the target of trumped up charges twice before and this case is likewise an attempt to criminalise him for his involvement in The Glasgow Defence Campaign and Fight Racism! Fight Imperialism! We will continue our work undeterred!’

The trail is to recommence on the Tuesday 27 November, 11am, Sheriff Court 19. We ask all those who believe in the right to protest free from police violence, harassment, arrest and trumped up charges to attend in support.

Solidarity!
Onwards as ever!
Posted by Miriam at 06:27