Solidarity with Asylum seekers in Glasgow!

Britain’s racist immigration system is not stopping for Christmas. This month has seen a family of five dawn raided and on-going court attempts to evict asylum seekers from their homes.

However resistance to this has been made. As well as supporting asylum seekers through court cases anti-racist campaigners have also taken direct action. The GDC reproduces below the statement released on Monday 10 December by campaigners who blocked the gates of UKBA offices on Brand Street. Please send messages of solidarity to the address provided and contact the Unity Centre for more information. We will update the blog with details of the court cases to follow when we find these out. 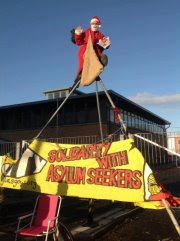 After an amazing nine hours blocking the entrance to the UKBA reporting centre in Glasgow, UKBA officials and police have this afternoon, detained an elderly gentleman from the North Pole. Rumours that they plan to deport him have not yet been confirmed.

UKBA officials and the police also refuse to comment on how Christmas arrangements will be affected.

Santa managed to stay on the tripod in front of the reporting centre for an amazing nine hours. He took the action today, International Human Rights Day, after the Border Agency detained a family of five last week. 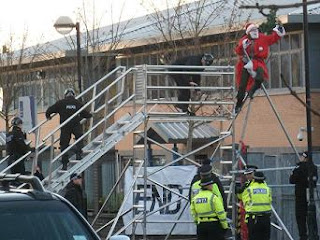 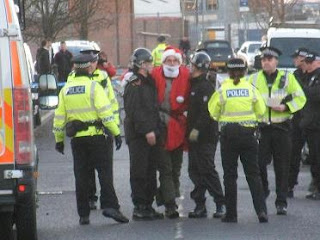 He said: "I'm taking this action to stop any more children from being detained by the UKBA like little 4 year old son Shahmer who with his two teenage sisters and mum and dad was arrested in his home last week by the UKBA. I am shocked that children can be locked up in this way when the government pledged they would never do this again."

One of Santa's little helpers was also arrested for not walking fast enough out of the exclusion zone police imposed on the protest during the operation to take him down from the tripod...
Posted by Miriam at 06:47