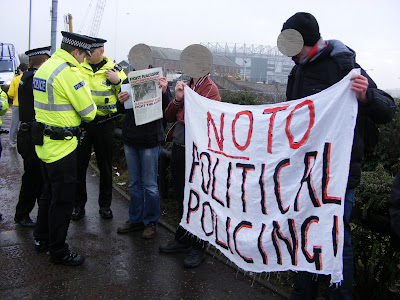 On Thursday 7 April, a young supporter of Fight Racism! Fight Imperialism! will be facing trial on serious charges relating to his arrest during student protests in Glasgow on 9 December 2010.
The Glasgow Defence Campaign is calling on all those interested in defending the democratic right to organise against the cuts to attend the protest outside Glasgow District Court on 21 St. Andrew's Street (off Saltmarket). Friends and supporters will be gathering from 9.30am on Thursday 7 April but people should make their way down throughout the day to show solidarity.
The arrest and charges against this particular activist were clearly a case of political policing. Another FRFI supporter was arrested on 9 December, and this followed months of harassment by Strathclyde police officers of FRFI stalls in Govanhill, which led to political material being seized from the streets and charges being issued (and then dropped) relating to the selling of the newspaper of Fight Racism! Fight Imperialism! The supporter in question was again arrested following protests in Glasgow on 29 January. See the police harassment log for a full incident list.
As the Glasgow Defence Campaign has consistently pointed out, state harassment of protest and dissent is only set to increase. Three people are currently awaiting trial after being arrested in their houses and charged in relation to Strathclyde police's eviction of the Free Hetherington occupation at Glasgow University on Tuesday 22 March. Another activist from Glasgow is currently in jail after being arrested outside Topshop during protests in London on 26 March.
We are confident that such harassment and criminalisation can be successfully defeated. We are determined that the actions of Strathclyde police on behalf of their political masters can be exposed and opposed. Once again, we call for maximum unity and action in defence of democratic rights. "Don't panic, organise!"
Posted by Miriam at 16:59