Strathclyde police carry out another eviction in Glasgow 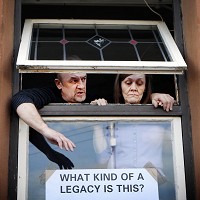 Less than 48 hours after a widely-condemned operation involving 100 officers violently evicting students occupying a building in Glasgow University in opposition to education cuts, Strathclyde police this morning deployed 'dozens' of police officers to evict Margaret Jaconelli from her flat in Dalmarnock in Glasgow's East End. As Jack Jaconelli told reporters today: “What’s this operation costing? There must be about a hundred and fifty police here. Terror tactics…they took the demonstrators away so that nobody could see them. An operation this size is a joke.”
Once again, the commitment of Strathclyde police and Glasgow City Council to defending the political and economic interests of the rich and the powerful at the expense of basic democratic rights and dignity has been exposed in this shameful episode.

See BBC news video here.
Below we reproduce a statement from the Glasgow Games Monitor 2014 on this morning's eviction.
Jaconelli family evited: some 'legacy'
After kicking up a huge fuss and reavealing the hypocrisy behind Glasgow City Council’s ‘Legacy’ claims for the Commonwealth Games 2014, the Jaconelli family were finally evicted today at around 7.20 am after Sheriff officers and ‘dozens’ of police arrived at 5.00 am.

There is much more to be said about this case (and we will say it all in time) but for now we want to congratulate the Jaconelli’s and their family, friends and supporters for fighting back against a City Council who would happily have walked all over them.

We’ve said all along that mega-events like the Commonwealth Games are more about land-grabs, than helping the local community; more about property speculation than social housing; more about the image of the city than its reality. Close observers of the Jaconelli struggle have now seen the truth of those observations. The City Council will now try to bury this story, but we have a feeling its going to run on and on…
Posted by Miriam at 14:13