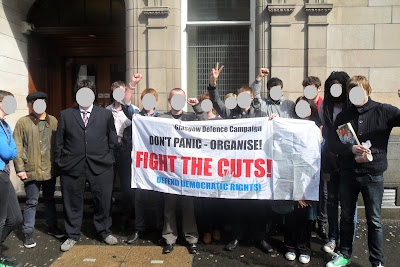 GLASGOW DEFENCE CAMPAIGN
Courts criminalise anti-cuts activist in Glasgow
Today, Monday 11 April, a young member of Fight Racism! Fight Imperialism! (FRFI) was found guilty of assaulting police officer Douglas Forrest during student protests in Glasgow on 9 December 2010. Judge Alan Finlay, sitting in Glasgow’s Justice of the Peace Court on St. Andrews Street, deferred sentencing for six months; a second charge of breach of the peace was dismissed.
Speaking outside the court, a GDC spokesperson stated:
“The Glasgow Defence Campaign is absolutely clear. Justice has not been served, and today’s events once more confirm our analysis of the political, class-ridden nature of the entire Scottish judicial system. Those in court on Thursday to witness the prosecution case saw three Strathclyde police officers – Douglas Forrest, Alan Carter, and PC Prentice – shamelessly perjure themselves in order to secure the conviction of a dedicated anti-cuts activist who participated in a student protest on which no members of the public or the police were injured and no property was damaged. This is nothing more than the political police in action.”
The only point on which the prosecution case rested was that it was inconceivable that police officers could be capable of lying under oath in court. Judge Finlay, in an irrelevant outburst against one defence witness on the legality of the initial protest, exposed the political nature of the court itself. His basis for conviction was the “credibility and reliability” of the police witnesses. Anyone familiar with the history of the British judicial system and its day to day workings cannot regard this as anything other than a sordid joke.
We are neither surprised nor shocked by today’s events. The political policing logged by the Glasgow Defence Campaign over the past twelve months clearly exposes the determination of Strathclyde police to smash any serious organisation against the cuts before it has even begun. In Glasgow, it is members and supporters of FRFI who have so far been targeted but in the coming period anyone serious about resisting the wholesale attacks on public welfare and the working class will be forced to confront the various bodies of the British state and stand up for democratic rights. The cuts to legal aid funding in Scotland, concentrated in Glasgow, represent a further attack on working class access to justice in this city. Within such a context, we would do well to remember the words of that most astute member of the British establishment, Brigadier General Frank Kitson: “Law should be used as just another weapon in the government’s arsenal, and in this case it becomes little more than a propaganda cover for the disposal of unwanted members of the public.”
Despite all this, we remain optimistic. If justice is denied to the people in the courts, we have no doubt they will find it on the streets and fight for it by any means necessary. Strathclyde police’s political harassment has completely failed to drive opposition off the streets and demoralise those committed to fighting the cuts; it has succeeded only in exposing increasing numbers of people to the true nature of the police and courts in this country.
Dominic O’Hara will again be facing trial this month on trumped up charges relating to his arrest following protests in Glasgow on 29 January. We will be organising solidarity protests outside the court and ask people to regularly check the blog for updates and to send us on any instances of political policing they have faced. A protest will be held this Saturday, 16 April, between 1-3pm outside the Royal Bank of Scotland on Gordon Street in Glasgow city centre to speak out against the cuts and in defence of the right to protest.
The Glasgow Defence Campaign would like to thank all our friends and supporters who have stood by us and attended the court sessions in solidarity in recent days. We extend our solidarity greetings to all others facing criminalisation for political activity against the cuts and offer our organisational resources to their defence. To Strathclyde police, we offer only a word of advice: oppression breeds resistance.
GDC PRO
Monday 11 April 2011, 21:00
Posted by Miriam at 13:12