Today, the renowned journalist and film-maker John Pilger forwarded on the following message to the Glasgow Defence Campaign:
"The police in Britain have begun a political war of intimidation against those who exercise their right to protest peacefully. No where is this more evident than in the outrageous actions of the Strathclyde police against the Glasgow Defence Campaign, including a direct attack on the right of free speech and peaceful assembly. Who will be next? If the police are allowed to succeed, other legitimate campaigns will be targeted. It's imperative the Glasgow Defence Campaign has the support of all of us."
Dr Derek Wall, former Green Party of England and Wales principal speaker, also sent the following:
"I am saddened but not surprised by the repression faced by your campaign.  Attacks on those who openly dissent are increasing and only through broad campaigns of solidarity in defence of the right to protest can public space for criticism be maintained.  In this spirit I would like to add my voice to your campaign."
The GDC thanks them for their principled messages of support, which will be read out at Saturday's protest. We call on everyone concerned with basic freedoms and democracy to send on messages of support and to stand shoulder to shoulder with those facing up to political policing and intimidation in Glasgow.
All out for Saturday! No to political policing! Defend the right to protest! 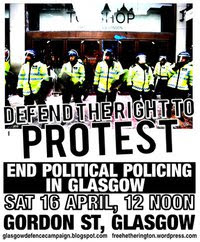