A supporter of FRFI learned on 30 December he is facing criminal prosecution for selling the newspaper Fight Racism! Fight Imperialism!, and is due to appear in court in Glasgow on 17 January 2011. We believe this citation to be politically motivated and an open attempt to undermine our ability to organise against the attacks on living standards in our communities. In response we are calling for a rally in defence of free speech in Glasgow city centre on Saturday 8 January. We call upon all individuals and groups to attend and show support. It will be an open megaphone for all those who wish to participate.
Free speech rally
Saturday 8 January 12-2pm
Donald Dewar statue,
Near the Royal Concert Hall, Buchanan Street Glasgow.
Called by the Glasgow Defence Campaign, and supported by Fight Racism! Fight Imperialism! and others.
No to political policing! Fight the cuts! All power to the people!
Posted by Miriam at 13:34 No comments:

10 December 2010 – GLASGOW On Thursday 9 December 2010, two supporters of Fight Racism! Fight Imperialism! (FRFI) were arrested by Strathclyde police during student protests against education cuts in Glasgow, one during disturbances on Sauchiehall Street and the other at the end of a police kettle in George Square. The supporters were taken to Stewart Street police station and detained overnight, appearing at Glasgow district court on 10 December. A number of charges were brought, ranging from breach of the peace and obstruction to more serious charges of assaulting and obstructing police officers and attempting to rescue or assist the escape of a person in custody. After pleading not guilty to all counts, both were released on bail, one with a city centre restriction order. Both are due to reappear in court in January where they are facing possible jail sentences.

FRFI are urgently appealing for witness statements, video footage and photographs relating to the arrest on Sauchiehall Street and incidents at RBS on Gordon Street and Vodafone shops on Argyle Street and Buchanan Street. FRFI supporters were assaulted by police on Sauchiehall Street and it is key that statements are given to counter police accounts of the day´s events. Please contact  glasgow_frfi@yahoo.co.ukThis e-mail address is being protected from spambots. You need JavaScript enabled to view it if you have any relevant information as soon as possible.


FRFI and our legal advisors are clear that this is targeted political policing. The two FRFI supporters detained were the only arrests on a day of action involving hundreds and had previously been the targets of police harassment for political activity by officers operating out of New Gorbals and Stewart Street police stations.

Today (10 December), the court hearing was moved to an earlier time and rushed through from the Sheriff to the District court in response to an FRFI mobilisation for supporters to attend the hearing originally planned for 2.30pm. Upon leaving the court, those arrested, their family members and supporters were stopped on the street by a vanload of uniformed police from Glasgow´s A-Division. PCs Colin Findlay, Claire Thompson and another officer (A500) involved in the previous day´s protests took it upon themselves to aggressively question, intimidate and harass all those making their way home. Then at 5.30pm, another FRFI supporter was pulled over in his car by police in the southside of Glasgow.

FRFI is launching a defence campaign in support of the FRFI 2. Having opposed political policing and intimidation on the streets of Govanhill in Glasgow, we will stand up for all our rights as we mobilize against the budget cuts and organize in defence of the working class. Already in Glasgow, other activists are facing banning orders and prison sentences relating to political protest. The treatment of the Gaza demonstrators and now the student protestors in London demonstrate the centrality of this question to any emerging movement. FRFI Glasgow will be organizing an open meeting in January to discuss these issues and call on all interested parties to join us. We call for maximum unity in defence of all those attacked and imprisoned by the British state in its attempts to silence dissent. 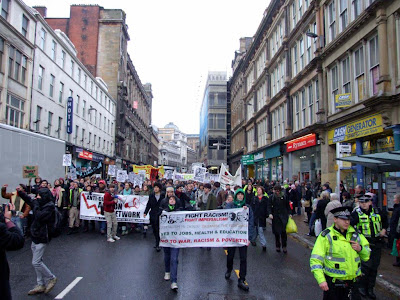 Day X3 protests in Glasgow saw hundreds of students join their comrades across Scotland and England in taking to the streets to protest against the proposed rise in tuition fees down south and the government´s destruction of education. The turn-out did not match the size of other demonstrations (tuition fees are still free in Scotland) but more than matched their militancy in one of the angriest and effective days of action in the city since the early days of the anti-war movement. FRFI supporters played a leading role in direct action throughout the day and two were arrested and detained by police, and on 10 December plead not guilty to serious charges of breach of the peace, obstruction, assault on a police officer and attempting to free a person in custody.

The day began as students from Glasgow, Strathclyde and Caledonian universities, the Glasgow School of Art, colleges, and secondary schools from across the city gathered on the steps of the Royal Concert Hall to hold an open mic meeting against the cuts. As the numbers grew, speakers from the various educational establishments, the Anti-Cuts Action Network and other groups addressed the crowd, making clear their determination to fight the coalition´s cuts and any attempts to introduce tuition fees in Scotland. One FRFI supporter currently at school spoke to the demo: “Are we so passive that we no longer see right from wrong? Can we no longer act upon our thoughts and challenge the status quo? By our presence here today we are showing we shall no longer accept the scraps thrown at us!”

Then the real action began. Unlike the respectable strolls which normally pass as “protest”, a spontaneous march then set off, the half dozen cops in attendance for once confused and outnumbered. There were no preplanned rallies by trade union bureaucrats and Labour party politicians to divert things into respectable dead ends. The example of Milbank and the London protests, as well as the direct actions and university occupations in Scotland in recent weeks, clearly inspired students to take matters into their own hands.

Throughout the day, protestors reclaimed the streets of the city centre, initiating a massive police response as the authorities completely lost control of the situation. Protestors targeted those symbols of the British business establishment which are the driving force behind the brutal assault on the country´s public services. The protest grew to hundreds strong as increasing numbers of students and members of the public, young and old, joined rolling pickets which occupied and blockaded Vodafone shops, branches of RBS, Bank of Scotland and Clydesdale, targeted Topshop and the British army recruitment office, tried to occupy Glasgow School of Art, took over roads and blocked intersections. Chants of “Whose streets? Our streets!”, “You say cut back! We say fight back!” and “You can shove your royal wedding up yer arse!” rang out through the town. At one point the crowd successfully struggled with police to de-arrest an FRFI supporter the cops had grabbed hold of. Throughout the day, the true role of the police was exposed to many for the first time as they violently and aggressively focused on protecting business, sacrificing the safety of demonstrators and members of the public. Police lines and kettles were broken through on at least a half dozen occasions as the tactics of the street were learnt; riot vans, hundreds of police and a helicopter rendered totally insufficient to contain the people´s anger.

On Sauchiehall Street, midway through the protest, police tried to regain control and violently assaulted and arrested an FRFI supporter. A violent struggle ensued as the crowd attempted to free him, police lashing out, pushing young women to the floor and hitting one 14 year old FRFI supporter in the face. The arrested comrade was assaulted in the police van, suffering bruising and cuts, as four officers restrained him. Cries of “police brutality” rang out as the police van drove into protestors surrounding the van in the street´s pedestrian area. Another FRFI supporter was arrested at the very end of the demonstrations, picked out on exiting a kettle in George Square. The scenes in George Square leading up to this saw police again use extremely aggressive tactics, assaulting and kettling a small group of peaceful school students, and shoving other female school students just crossing the square. After being taken to Stewart Street police station, one comrade was unnecessarily strip searched and both interview by plain clothes CID attempting to solicit information on “leaders”. Although both granted bail, one is now banned from the city centre.

The arrests of the two FRFI supporters were the only ones on an excellent day of action. Students and young people in Glasgow, following weeks of university occupations and direct actions, have sent a clear signal that anger and militancy has reached a whole new level; a new movement is being born as the class lines are drawn. The two FRFI supporters detained were the clear targets of political policing and a campaign has been launched in their defence. Other young activists in Glasgow are already facing banning orders and jail sentences relating to political activity here and in London. We stand fully with all those attacked by the British state and will defend them until the last. Victory to the resistance!