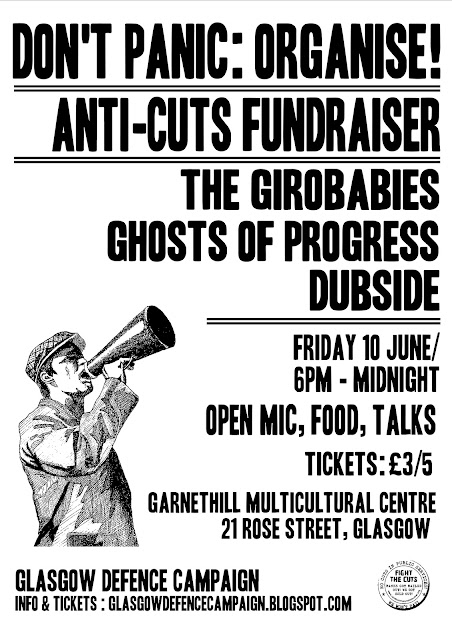 More messages of solidarity to the campaign

Tommy McKearney, former Republican hunger-striker, now organiser for the Independent Workers Union of Ireland and leading socialist journalist, has sent the following message of solidarity to the Glasgow Defence Campaign:
There is nothing new about political policing in any part of the UK. As part of the machinery of state, British police forces usually believe that they are entitled to do whatever they feel is necessary to protect their employer. We are so used to this type of policing in Ireland that we almost take it for granted yet it is a huge mistake to concede any ground on this issue. Allowing police decide what is politically acceptable is quite simply toleration for a police state.
Every effort must be made, therefore, to prevent the Strathclyde police getting away with political harassment of activists and we must all offer our wholehearted support to the Glasgow Defence Campaign. - Tommy McKearney

The Manchester branch of the Revolutionary Communist Group and supporters of Fight Racism! Fight Imperialism! also sent the following message of solidarity:

Update: May trial of anti-cuts activist adjourned until July

Update: The GDC has learned that the trial of Dominic O'Hara has been adjourned until July. Watch this space for further updates.

Dominic O'Hara was due to appear at Glasgow District Court on 23 May on a politically-motivated charge of police assault during an anti-cuts protest in Glasgow on 29 January. This has now been moved once again to July. Dominic - alongside other members of Fight Racism! Fight Imperialism! - has been a consistent target for Strathclyde police harassment over the past year.  It is especially important people turn out in numbers to show solidarity with this young activist who has already been convicted on the word of lying police officers for his part in another protest in Glasgow on 9 December and faces the serious possibility of a custodial sentence.
Joey Simons, another member of FRFI, will appear in court on Monday 6 June, on trial for several charges also relating to the 9 December student protests.
The Glasgow Defence Campaign is committed to defending all those under attack from the authorities for organising in opposition to the social devastation pursued by the Tory government and Glasgow's Labour city council. Hundreds of young people took to the streets of Glasgow throughout December and January to voice their anger about the destruction of education and the multinational businesses continuing to avoid billions in taxes. It is of equal importance that people come to the streets in numbers to voice their anger that young activists taking a leading role in these demonstrations are criminalised for exercising their right to protest.
Solidarity with anti-cuts activists! Defend the right to protest!
Glasgow District Court, St. Andrews Street, Glasgow (just off Saltmarket)
- Monday 6 June, from 10am

On Tuesday 3 May, supporters of the Save the Accord Centre campaign, Citizens United, Margaret Jaconelli and the Glasgow Defence Campaign gathered to confront the leaders of Scotland's main political parties. A final hustings debate, before the election on the 5 May, was being held in the Glasgow Piping Centre and was broadcast live on STV.
Despite being kept outside the building by security staff the crowd of 50+ made sure that their voices were heard chanting 'Glasgow Labour council, Shame on you!', 'Save the Accord, Save the Accord, Save the Accord right now!' and other popular slogans.
The mainstream press were forced to take account of the campaigners noisy presence and so too were the party leaders - Gray (Labour), Goldie (Tories), Scott (Liberals) and Salmond (SNP) - as people demanded answers and assurances off them that the Accord Centre in Dalmarnock would not be closed to make way for a road and car park for the 2014 commonwealth games.
One campaigner commented that 'commonwealth shame' is a more appropriate title for the event. With the poorest and most vulnerable groups in society, such as the elderly, disabled and young, having the services which they require to live a decent life ripped away from them this is a title which cannot be disputed.
As the demonstration dispersed Dominic O'Hara - a supporter of the Glasgow Defence Campaign - was harassed by officers who claimed that he was banned from entering Glasgow city centre. This relates to bail conditions which were informally imposed on a fourteen year old and formally held on two seventeen year olds and two other anti cuts campaigners two weeks ago when all five were spontaneously arrested by Strathclyde police for participating in a peaceful protest on the 9 December 2010 against education cuts. Charges against all five were dropped on 21 April and the restrictive bail conditions were lifted.
PC David Markey (A413), Constable Hay (A80) and Sergeant Wilson (A548) were the offending officers.
The GDC salutes the people who came out yesterday to express their opposition to the cuts and the ‘commonwealth shame’. It will be normal Glaswegians that will be sacrificed for the interests of the rich and corrupt and so it will have to be normal Glaswegians that take a stand against these people and their army known as Strathclyde police.
No to political policing!
Fight the cuts!
Save The Accord Right Now!
Glasgow Defence Campaign
Contact us with any details of police harassment – see our Police Harassment Log at
http://glasgowdefencecampaign.blogspot.com/ or contact glasgowdefence@yahoo.co.uk
Posted by Miriam at 04:41 No comments:

Trade Union support builds for the GDC and against political policing

If you tolerate this....

The Glasgow Defence Campaign would like to highlight this case of political policing in Soho Square London which took place on 29 April 2011. We would like to condemn the sinister use of undercover snatch squads against peaceful assembly.
Posted by Miriam at 18:59 No comments: