Defending the right to defend Palestine 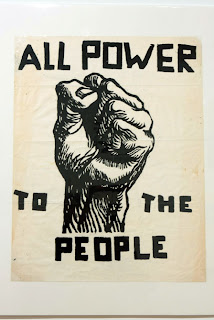 On Thursday 29 March, supporters of Fight Racism! Fight Imperialism! the Glasgow Defence Campaign, and other individuals held a successful static protest outside Marks & Spencer's, Sauchiehall Street Glasgow, in order to highlight the appalling treatment meted out against Palestinian political prisoners at the hands of the racist Israeli state – a state supported by the British government and its biggest Zionist corporate backers at Marks & Spencer's. Despite open invitations being given out – the left in Glasgow maintained their ongoing boycott of Palestine solidarity activity involving supporters of FRFI.
Had any of the Glasgow left bothered to turn up, they would have been able to witness at first hand the success of the Glasgow Defence Campaign eighteen-month-long campaign against police harassment. At 4.15pm, four officers from Strathclyde police, some of whom are known to GDC supporters, turned up to the protest and entered the Marks & Spencers store in order to speak to management and security. Upon leaving the store, all four officers quickly dispersed, without approaching or gaining any details of those participating in the protest. The Glasgow Defence Campaign has reason to believe that officers operating out of Stewart Street Police station are keen to avoid becoming ‘the next PC Hay’. Police Constable David Hay has gained infamy online,as one of those involved in harassing FRFI supporters at last years Scottishelection campaign, a video of which has become quite a hit – soaring to over 215,000hits at the last count.
Speaking today, Paul McKenna for the Glasgow Defence Campaign stated, ‘We welcome the fact that the police chose not to interfere with our political work, it has once again vindicated the open approach we have pursued – the police must come to understand that if they choose to harass us or attempt to intimidate us then they will be held publicly and legally accountable for their actions.’ In order to further highlight the need to oppose the criminalisation of politics the GDC are having a street rally on Saturday 31 March from 1- 3pm at the Donald Dewar Statue, top of Buchanan Street.
On Monday 2 April the GDC are once again holding a protest outside Glasgow District Court, from 9.30am, outside the first legal challenge in Scotland to the police tactic of kettling as a part of a trial against FRFI supporter Dominic O’Hara.
Sign the new petition online here: http://www.petition.co.uk/defend-the-right-to-protest-oppose-the-criminalisation-of-protest/
Posted by Miriam at 15:29 No comments:

The Glasgow Defence Campaign have launched a new petition in paper and online calling for an end to police and Crown Office criminalisation of political protest in Scotland. The petition specifically demands that Strathclyde police end the practice of kettling, and calls for an end to the misuse of charges such as breach of the peace, obstruction and street trading legislation to criminalise political activity in Scotland, and furthermore calls upon the Procurator Fiscal to recognise that pursuing charges against peaceful anti-cuts protesters is not in the public interest. The petition will be handed to the Crown Office – the office of the state prosecutor – with the express view of making all those engaged in the criminalisation process aware of the public support which exists determined to uphold the right to protest and organise against the cuts.
On 1 March, the legal debate surrounding the legality or otherwise of the police tactic known as ‘kettling’ was once again postponed due to the Crown being ill prepared and is scheduled to take place on Monday 2 April, where the GDC are again holding a court protest. This is the first legal challenge in Scotland to this abuse of police powers and forms part of the GDC strategy of challenging through the courts those who seek to undermine our basic democratic rights, along with regular street protests. Together with this, the GDC has recently produced thousands of ‘Know your rights’ bust cards, which are available from the campaign.


The GDC petition can be signed online here http://www.petition.co.uk/defend-the-right-to-protest-oppose-the-criminalisation-of-protest/
Posted by Miriam at 04:55 No comments:

Pleading guilty for a lesser sentence? Really? Who says this?

The following information has been collated and published by our friends at the Legal Defence Monitoring Group, which we are pleased to circulate to supporters of the Glasgow Defence Campaign. It contains interesting and somewhat definitive vindication that pleading guilty in the hope of getting a lesser sentence is NOT a good tactic in political trials. This is a point we have repeated ad nauseam, to those who have argued that pleading guilty will somehow either result in a lesser sentence – or halt police harassment.
We would like to thank the Legal Action Monitoring Group for bringing this information to our attention – it is our hope that by making it more widely available that these hard lessons be learned and understood – so that in the future we do not repeat these mistakes of the past.
SENTENCING SUMMARY FROM RECENT STUDENT AND ANTI CUTS PROTESTS


17 year old maleFound guilty of VD at student protests
Sentenced 22/9/11 at West London youth court
Sentence - 3 months tag and curfew, 100 hours community service – plus £480 costs.
Many reasons given for non custodial but mainly age and being tried in youth court and having good family support (in court) – they are appealing

Male (SD) – Interesting case
Originally charged with VD but juge decided it was not VD or affray and he eventually accepted a bindover for breach of the peace
pleaded guilty to BoP
7th December 2011 - Kingston - Judge: DodgsonSentence: bound over to keep the peace for 6 months, £100 costs?
He got 165 pound refund for travel/court costs
Prosecution had to admit that they couldn't link him to black block and that his behaviour didn't amount to affray or vd
Solicitor. Matt Foot, Birnberg + Pierce

MaleFound guilty of agg tress at Millbank -
Sentenced 29/7/11 – 100 hours comm service and £200 costs – judge admitted he caused no damage but was part of larger group that did
MaleFound guilty of two counts of crim damage at treasury on student protests
Sentenced 8/7/11 - to 8 weeks electronic tag and curfew £1,600 and £500 for damage done to window and lampost and £350 costs,

FemaleFound guilty of assaulting a police woman when in a kettle on November, trial in the magistrates court 15/9/11. Sentence £750 fine instead of unpaid work, and there are extenuating circumstances that prevented a custodial and the work.

Male Pleaded guilty to having articles with intent to cause criminal damage for having 2 dry wipe markers and two tubes of super glue.
Sentenced - Kingston  Judge Price - Nov 4th
Sentence -150 hours unpaid work and £350 costs
Posted by Miriam at 07:31 No comments: