Resisting Militarism: Solidarity with the Finnieston 4!

The GDC expresses its full solidarity with the four anti-war activists arrested and charged for unfurling a ‘Resist Militarism’ banner from the Finnieston Crane on 28 June, Armed Forces Day. We urge all our supporters to send messages of support to whitefeatherclubglasgow@gmail.com and join all future court protests. Here, a GDC supporter looks at the growing trend towards normalising militarism and repressive policing, and the real role of the Commonwealth Games.

Boots on the ground

You’d think they were trying to tell us something. Britain’s national event for Armed Forces Day this year was held in Stirling on 28 June. As it happens, purely coincidentally, Stirling was chosen as host city at the same time as it would hold events to mark the 700th anniversary of the Battle of Bannockburn. The Princess Royal, alongside Prime Minister David Cameron, Leader of the Loyal Opposition Ed Milliband, and Alex Salmond, were on hand to oversee the carnival of reaction: service parades, ‘exciting military demonstrations’ of Apache attack helicopters and Red Arrow fly-bys. As families looked on, the very same day, these instruments of death were being put to other uses, as the IDF pounded artillery shells into Khan Younis and wounded seven Palestinian children and a pregnant women.

A month later, the Red Arrows were back in Scotland, flying over Glasgow to mark the opening ceremony of the Commonwealth Games as Her Royal Highness shuffled around Parkhead, God Save the Queen was sung and presumably, teary-eyed, the Chief of the Armed Forces looked longingly over the remnants of the colonial empire she once proudly headed.

And, just in case we didn’t get the point, Glasgow has been chosen as the focal point of the British government’s activities to commemorate (or should that be ‘celebrate?’) the 100th anniversary of the mass slaughter of World War One. The Secretary of State for Scotland, Michael Moore, has invited Commonwealth leaders to remain in Glasgow and attend a special ceremony after the Games end to ‘add to the sense of occasion.’

As independence looms, the British establishment, and its willing toadies in the City Council, seem keen once more to present Glasgow as a loyal city of Empire.

As the artillery rolled through Stirling, the same day four brave female anti-war activists scaled the Finnieston Crane in Glasgow to protest against the glorification of war on Armed  Forces Day. A huge banner was unfurled that read ‘RESIST MILITARISM #whitefeather’. The Glasgow Defence Campaign salutes this imaginative and brave act of dissent. Speaking from the top of the crane, one of the protesters, Friday Grey, said: ‘When children in Scotland go to see tanks and bombs today in Stirling, that’s part of the normalisation of military culture.’ Actions and protests such as this are crucial in disrupting that culture.

As a statement from White Feather on the protest noted, £55 million is being spent on the UK government funded celebrations of the start of WWI: ‘”The War to end Wars” was a lie then and a 100 years later a new generation is being told that lie to indoctrinate them with militarism and with a heartless irony, sell them a myth to ensure support for current and future wars. It’s time to speak out and these brave activists have done so in the proud traditions of Glaswegians Mary Barbour, John Maclean and the many, many war resistors from Glasgow and far beyond.’

Unsurprising, Police Scotland responded to this peaceful protest against mass slaughter by arresting the four activists, detaining them for 48 hours in police cells and charging them with ‘breach of the peace.’ Presumably, the Finnieston Crane felt ‘fear and alarm’ at being so wantonly abused. The Procurator Fiscal duly took up the case against the activists as being ‘in the public interest.’

Supporters of the GDC will be familiar with the concerted attempts at Police Scotland, and its predecessor Strathclyde Police, to harass, undermine and criminalise any expressions of opposition to war and militarism in Glasgow. In the past week alone, supporters of Fight Racism! Fight Imperialism! (FRFI) organising solidarity with Palestine have had streets stalls disrupted and public meetings visited by uniformed police officers demanding information.

The four activists appeared in court on 30 June, with the GDC joining the supporters who gathered inside and outside the Sheriff Court in solidarity. The four women all pled not guilty and were released on bail with the next court date set.

In a significant development, however, the Crown initially tried to impose bail with ‘special conditions’ preventing the accused from entering what they termed the Commonwealth Games ‘events zone’ which included over a dozen areas of the city and the entire Marathon route. As the judge, who struck down the attempt, commented, this would have meant the accused being unable to leave their homes and going to their places of work, study and other locations. All this over a breach of the peace charge and a protest that had nothing directly to do with the Commonwealth Games.

Boots on the ground

As the GDC has consistently noted, the attempts to impose special bail conditions on anti-cuts and anti-war activists shows more than anything the political nature of these arrests and charges. Other activists in Glasgow, including GDC supporters, have previously faced repressive bail conditions such as ‘city centre exclusion zones’ and bans on ‘gathering with two or more people for the purposes of a demonstration.’

The attempt by the Procurator Fiscal to deploy the Commonwealth Games as a factor in the treatment of the arrested activists confirms another point made by the GDC, the Glasgow Games Monitor and anti-ATOS campaigners over the past two years: that the Commonwealth Games is being used as an excuse to clamp down on dissent, extend increasingly repressive policing, normalise the deployment of armed soldiers on the streets and destroy any opposition to the corporate interests which dominate both the Games and Glasgow itself. The case of the Glasgow Against ATOS 2 – FRFI activists arrested and charged for speaking on a megaphone against the Commonwealth Games sponsors – and the recent arrest of an anti-ATOS activist during the Queen’s Baton relay in Barrhead are just two examples. The latter was banned from entering any Games venues for the duration of the event.

The security operation for the Commonwealth Games is the biggest ever seen in Scotland. The policing tactics of Police Scotland during the event are based on the ominously named ‘Project Servator’, developed by the City of London police in order to ‘protect the City as a global financial centre.’ According to Project Servator, one of its tactical pillars is ‘hostile reconnaissance’ – the ‘purposeful observation of people, places, vehicles and locations with the intention of collecting information to inform the planning of a hostile act.’ The targets of such hostility are helpfully defined as ‘criminals, whether extreme protest groups, organised crime or terrorists.’ Alongside dozens of armed police officers on the streets of Glasgow, more than 2,000 Armed Forces personnel are involved in the security operation, including units from the Black Watch, while Typhoon fighter jets are on standby. Detective Chief Inspective Allen informed the public that ‘those going to events will see uniformed personnel, whether they’re military or police, at the entrances.’

To borrow from the marketing jargon of the Games organisers, this will be one the key ‘legacies’ of the Commonwealth Games. This huge security operation will not melt away after the Games. Like Armed Forces Day, its role is to normalise the apparatus of repression, of armed police and soldiers on our streets. Its real target is not some anonymous ‘terrorist threat’ but the protesters, activists, and in the end, the working class communities of Glasgow who may dare to raise their voices in opposition to the endless violence of the British state at home and abroad.

We answer them with the words of Glasgow’s revolutionary son, John MacLean, as the first volleys of the World War were being fired: ‘Let the propertied class go out, old and young alike, and defend their blessed property. When they have been disposed of, we of the working class will have something to defend and we shall do it.’

Defending the right to defend Palestine! 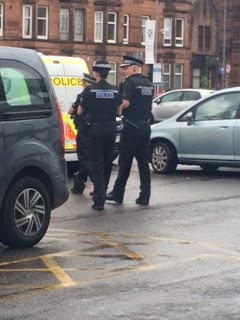 The Glasgow Defence Campaign calls again for protest in defence of Palestine itself to be defended. Today 2 August, 13.00hrs, Fight Racism! Fight Imperialism! (FRFI) supporters in Govanhill, who had publicised a protest against the bombing and blockade of Gaza, were followed and harassed by four officers.

Taking up the call for Boycott, Divestment and Sanctions (BDS) against Apartheid Israel and its illegal settlements in Palestine FRFI supporters planned pickets of Tesco and Sainsbury’s on Victoria Road. There is nothing illegal in this. That is your democratic right to protest.

The reality of British democracy and British establishment support for Apartheid Israel  was demonstrated by the officers, in marked and unmarked cars, who stalked a supporter on his way to the protest and then followed him into Lidl store with the senior officer asking him randomly "can I help you". In an attempt to intimidate and provoke the officers approached staff to warn of the protest and asked the supporter "don't you remember shouting at me last week". The police remained visible for the duration of the event and then unsuccessfully attempted to follow supporters leaving for the Palestine protest in the city centre.
Posted by Miriam at 09:20 1 comment: