GLASGOW DEFENCE CAMPAIGN
PRESS RELEASE
For immediate release
Anti-cuts protester criminalised in Glasgow
Dominic O’Hara, a 20-year-old student at Strathclyde University, was arrested this afternoon (29 January 2011) as he left a protest against cuts and in defence of local services. He is being held in Baird Street police station and will appear in Glasgow District Court (1 Carlton Place, next to the Sheriff Court) on Monday charged with obstruction and assaulting a police officer.
‘Dominic is being targeted for the active role he has played in fighting university tuition fees and EMA cuts’ a spokesperson for the Glasgow Defence Campaign said today. ‘The police knew he was already on bail facing two identical charges after an anti-cuts protest on 9 December and are now looking for an excuse to hold him on remand.’ The spokesperson added ‘There is now a pattern of police targeting of supporters of Fight Racism! Fight Imperialism! because of the leading role they have played in the campaign against the cuts. Supporters of the paper have been charged with selling it on the streets in a clear breach of their human rights. It also follows a period of unsuccessful police harassment of stalls supporters have held on streets in Govanhill.’
The Glasgow Defence Campaign is calling on supporters to picket the court on Monday from 10.00, and to condemn the criminalisation of those who oppose government attacks on the state sector.
For further details contact 07961 040 418 or glasgowdefence@yahoo.co.uk or http://glasgowdefencecampaign.blogspot.com/
Posted by Miriam at 11:56 No comments:

This is an urgent appeal to call to demand the release of Dominic O’Hara who has been targeted and arrested for taking part in the anti cuts protests in Glasgow today. Please call Baird Street police station on 0141 532 4100.
Dominic was arrested this afternoon 29 January 2011 at approximately 1.15pm, on St Vincent Street, Glasgow as he was walking away from today’s demonstrations in  opposition to the cuts and in defence of public services. He was with three other supporters of the Glasgow Defence Campaign, one of which, a member of Fight Racism! Fight Imperialism! was also assaulted during the arrest of Dominic. Around twelve officers were involved in the arrest.
The comrade has become the target of a sustained campaign of harassment and political policing by Strathclyde police officers operation out of different stations across Glasgow. In July 2010 he was charged with ‘illegal street trading’ for distributing the newspaper Fight Racism! Fight Imperialism!, in August he was subject to a sustained period of harassment an abuse from uniformed officers based at the New Gorbals police station. In December he was arrested, alongside another FRFI supporter at the student demonstrations against the cuts in Glasgow, where he is facing trumped up charges including police assault, he is due to go to trial in February where is pleading not guilty. We need to be clear, it is the police who have acted illegally, it is the police who have opted to selectively target, harass, assault and detain members and supporters of Fight Racism! Fight Imperialism!
Miriam Kelly, a spokesperson for the Glasgow Defence Campaign this afternoon said ‘We condemn the political policing and the violence of the police, it is clear that our comrade was targeted as he moved away from the demonstration and away from other peaceful protesters. We condemn in particular the paramilitary style policing which is now being visited upon the people of Glasgow as we fight to defend local services and oppose job losses. We pledge to continue the struggle in order to defend all those who are subject to police harassment.’
A demonstration of around 40 people demanding the release of Dominic is currently underway outside Baird Street police station.
Posted by Miriam at 07:18 No comments:

The Glasgow Defence Campaign today condemns the actions of the Legal Aid Board in their refusal to provide legal aid to the comrade facing criminal charges for selling the newspaper Fight Racism! Fight Imperialism! see below
The comrade, who will be appealing the decision stated, ‘This is one of the means through which access to justice is denied to increasing numbers of working class people throughout the country, while the state has unlimited resources which are used to target and harass ordinary people, we will be arguing that it is in the public interest that those who engage in legitimate political activity are allowed access to defence solicitors.’
As a result, the Glasgow Defence Campaign are making a financial appeal to help meet our legal costs. Cheques can be made out to Glasgow FRFI, and can be sent to Glasgow Defence Campaign, c/o BCM box 5909, London, WC1N 3XX.
Posted by Miriam at 12:03 No comments:

Opposing the criminalisation of politics

Opposing the criminalisation of politics
The trial of the FRFI supporter facing criminalisation for selling the newspaper Fight Racism! Fight Imperialism! will go ahead on 14 March 2010 at 2pm in court number 3 of Glasgow Justice of the Peace Court. The Glasgow Defence Campaign are calling on supporters to attend the court.
The supporter, who has sold FRFI in Glasgow and elsewhere for over thirteen years stated, ‘this is a politically motivated charge being pursued by state prosecutors who appear on the face of it, willing to disregard the law they are using, and bypass the implications of human rights legislation in Scotland’.
FRFIs legal advisers are maintaining that the charge for ‘carrying out business as a street trader without having a licence in terms of Section 39 of the Civic Government Scotland Act 1982’  is not a competent charge as section 39 (3) (a) itself states ‘A street trader’s licence shall not be required for the sale of newspapers only’. Either the procurator fiscal solicitors have not read this, or, as we suspect it is a charge determined to undermine the organised resistance to the cuts.
Commenting on the implications of having to face a criminal prosecution, the supporter said, ‘We need to ask why this is happening now, for us it is quite clear, the first intention is to intimidate our members, our families and friends, they also want to warn off the growing support we have in our communities, and to prevent the distribution of our newspaper.’ Faced with the prospect of criminalisation for legitimate peaceful political activity, the Glasgow Defence Campaign have no other option other than to escalate our activity in defence of our rights to organise on the streets.  We are in talks with our legal advisers about the next step in relation to our legal defence, we reserve the right to identify and pursue those who are behind the harassment in the civil courts.
The Glasgow Defence Campaign has organised a free speech rally in the centre of Glasgow on the following date, with more to come.
Street rally: Defend democratic rights!
Saturday 5 February, 12-2pm
Donald Dewar statue, top of Buchanan Street, Glasgow
Protest called by Glasgow Defence Campaign, supported by FRFI and others
Posted by Miriam at 03:24 No comments:

The Glasgow Defence Campaign, supported by Fight Racism! Fight   Imperialism!, has called a public meeting around the urgent issue of fighting the cuts and defending democratic rights.
We urgently need to fight in defence of the right to organise on the streets and in our communities. Strathclyde police has increased its  harassment of political activity in Glasgow and has targeted groups like FRFI which have actively opposed this. Supporters have faced arrest and criminal charges and this will be extended to anyone building       resistance unless we stand up for our rights.  If opposition to the       government´s war on the working class is to be successful, it is crucial that we can defend ourselves and others from state harassment.
We invite all progressive groups and people to attend and contribute to this meeting and discussion. Stand up for your rights!
Public meeting: "Fighting the cuts and defending democratic rights."
Wednesday 26 January, 7pm
Langside Halls, 1 Langside Avenue,
Shawlands, Glasgow (opposite The Shed)
Posted by Miriam at 08:36 No comments:

Stand up for your rights! Street rally against polititcal policing. 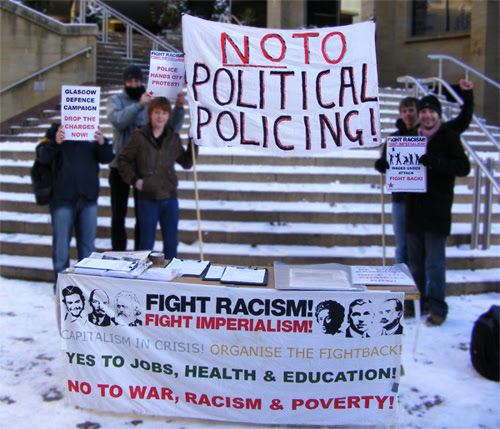 Glasgow Defence Campaign and Fight Racism! Fight Imperialism! supporters today (8 January) held a “Stand up for your rights” street rally in Glasgow city centre in defence of democratic rights and in opposition to political policing. On 30 December a supporter learned that he is facing criminal prosecution for selling the newspaper Fight Racism! Fight Imperialism! in Glasgow and is due to appear in court on 17 January 2011. We are clear that this citation is politically motivated and an open attempt to undermine our ability to organise against attacks on living standards in our communities. FRFI supporters have previously been charged by Strathclyde police for selling the newspaper and two are currently awaiting trial following their arrest on student demonstrations in the city last month.

The rally was a lively and militant event as over a dozen people took to the busy streets to raise awareness of growing police harassment in Glasgow and elsewhere. A large banner reading “NO to political policing!” was present throughout and an open megaphone allowed people to make their anger heard. As one young protestor made clear: “We do not have the wealth to circulate thousands of free newspapers across the country every morning but we are determined that our message is heard: we must defend our democratic rights or we risk having them taken away by the British state!” Another stated: “The establishment say that we are only out to cause trouble and destruction. Let us be clear: we are not the ones destroying already inadequate education, housing and health care; we are not the ones destroying peoples´ lives by cutting wages and benefits; we are not the ones who destroyed millions of lives in Iraq and Afghanistan! Those in power are the real troublemakers!”

In response to the intensifying state harassment, the Glasgow Defence Campaign and Glasgow FRFI have organised an open meeting on fighting the cuts and defending democratic rights. The past year in Glasgow has seen anti-fascists, Palestine solidarity campaigners, Republican activists and students all face police harassment, while in Edinburgh, three anti-cuts protestors have recently been picked up by police for participating in December´s student demos there. It is crucial that our political, organisational and legal experiences our shared for the benefit of all those active in progressive politics, and even more importantly, for those who are yet to take to the streets. All interested groups and individuals are invited to attend and speak.

Self defence is no offence!
All power to the people!

http://revolutionarycommunist.org/index.php/reports/scotland-reports/2024-stand-up-for-your-rights-street-rally-in-glasgow-as-third-frfi-supporter-charged.html
Posted by Miriam at 08:33 No comments: