The Glasgow Against Atos 2 On Trial

Glasgow Defence Campaign supporters gathered at the Sheriff Court on 25 July to oppose political charges brought against the Glasgow Against Atos 2. The trial was adjourned until 1 October allowing time for the defence solicitors to organise witnesses. 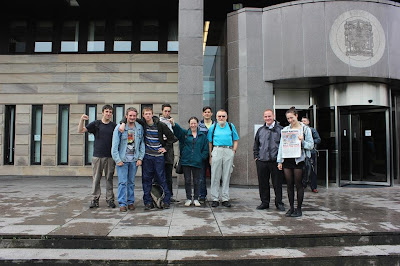 The two campaigners standing trial Dominic O'Hara and Daniel McGarrell were arrested on a Glasgow Against Atos campaign picket on Friday 22 February this year. As we pointed out at the time it was no coincidence that the two people arrested were also supporters of Fight Racism! Fight Imperialism! which has been targeted for over three years by Strathclyde police for consistently opposing the cuts and political policing.

Indicators that Strathclyde police were out to arrest campaigners that day were confirmed when officers outlawed the use of a loudspeaker half way through the picket due to apparent ‘noise complaints’. Those familiar with Glasgow City Centre will know that the corner of Gordon and Buchanan Street is one of the noisiest and busiest parts of town with street performers and people heading to and from the central train station.

The complaints, if they were genuine, were nothing to do with noise but everything to do with the kind of noise being made. A loudspeaker open for anyone wishing to condemn the hardship and misery sick and disabled people are being put through by the Department for work and pensions and Atos was an ‘undesirable’ noise on Britain’s second richest shopping street  - the so called ‘style mile’ - and so it was outlawed. Police officers, paid and controlled by the people waging war on basic rights to welfare, moved in to silence the protest. The first campaigner now faces framed charges of using a loudspeaker when told not to by officers and police assault. The second campaigner has a fixed up charge of trying to free a person in custody.

A Glasgow Against Atos 2 defence campaign has been set up to demand the charges are dropped, support the two at court and to pay off the potential cost of fines. If the Glasgow Against Atos campaign is to continue its successful street actions and grow, it will face further criminalisation with arrests and court appearances, so it must defend its right to protest now. First and foremost this will be done by politically and financially supporting its campaigners from the day of their arrest to the end of their trial if it goes that far.

Solidarity with the Glasgow Against Atos 2
Drop the political charges!
Defend Free Speech!

GAA2 Defence Campaign
https://glasgowagainstatos.wordpress.com/gaa-2-defence-campaign/
Posted by Miriam at 02:21 No comments: