The GDC is reproducing this article written by a supporter who witnessed Tuesday's attack.

The above film features the immediate aftermath of the police attack on the demonstration.
One of the most commonly cited charges in used against the population in general, and the protest movement in particular, is that of so-called ‘breach of the peace.’ It is a widely defined crime, which was stated in 2001 as requiring conduct which is ‘severe enough to cause alarm to ordinary people and threaten serious disturbance to the community.’ [1] It has often been criticised for lacking precision – and falling short of the necessary requirements of the European Convention on Human Rights in this respect. In a case of breach of the peace relating to protests against the G8 Summit in Gleneagles in 2005, the Sheriff sustained a case that there was no case to answer, and this decision was later upheld in the appeal court since the ‘demonstration was entirely peaceful’ and there was ‘no evidence of anyone being alarmed or distressed.’ [2]
Recent appeal cases have upheld the need for the Crown to show evidence of actual alarm or distress having been caused by other people – something more than mere swearing or obscene gestures is likely to be required before the conduct could be said to amount to breach of the peace. [3] It is also clear that breach of the peace must have a public element, although the nature of this element remains unclear. [4]
In police parlance, what is termed a ‘dirty breach’ is used against those who the police intend to fit up, where no actual offence has taken place. Nowhere is this more evident than on the demonstration in on 17 April, where one young protester was arrested and further arrests were thwarted due only to the solidarity of the crowd. The Glasgow Defence Campaign has footage of the actual arrest which took place, which in our legal opinion not only exonerates the targeted activist but implicates the police in yet another politically motivated arrest.
In , over 90 per cent of people plead guilty to the charges levied against them and, in all but the most serious cases, pushed through non-jury courts sitting with a single judge. Many defence lawyers collaborate with the prosecution, encouraging clients to plead guilty for a lesser charge as part of the plea-bargaining or charge-bargaining process. It is established practice for the Procurator Fiscal to consciously overload the charge sheet to this end.
This is exactly what Fight Racism! Fight Imperialism! supporters in  have faced over the past two years, with pressures placed on people to plead guilty. If a defence is mounted, trials can take well over a year to come to fruition. The so-called summary route to justice established in in the 1970s, ostensibly to speed up the judicial process, is in complete disarray. Farcical scenes are played out in the courts every day in those isolated instances where the accused mounts a defence. An afternoon spent in any local court would confirm this.
Another common myth is that in pleading guilty you will received a lesser sentence. In the recent Dundee case involving Shaun Divin (16) and Jordan McGinley (18), we saw young people politically sentenced to four and three years custody respectively for something they wrote on Facebook. The absolute danger of collaborating defence lawyers advising and lodging guilty pleas is there for all to see. These are the hard lessons which must be learned by the protest movement.
As we have repeated time and again on this blog and in articles in Fight Racism! Fight Imperialism!, the law is used as just another weapon in the state’s arsenal of repression. Political charges must be fought with a political defence. We once again pledge our support for all those on the receiving end of police attack. Do not speak to the police. Admit nothing, volunteer nothing. Speak to defence solicitors who will give you the time of day. Educate yourself on the law, in a few short hours you will know more than the average beat officer.
But we are reminded constantly, in the end it is not about legal knowledge; it is about the fundamental political point – that the police are waging a political war against any form of effective protest in this country. Reliance on legal methods alone is a complete dead end. We need to put those officers directing these attacks under as much public scrutiny as possible. It is high time that the impunity of police actions in came to a dramatic halt before has to bury its own Ian Tomlinson. This was the gravity of the chaotic scenes on ’s street on yesterday’s protest.
Paul Mallon
18 April 2012

DEFENCE CAMPAIGN
Strathclyde police lose the plot – defend the right to defend !
Strathclyde police officers violently attacked a peaceful protest in the centre of on 17 April, using unjustified force to arrest one young man in chaotic scenes on at approximately 19:00. Another man, believed to be a bystander, was struck unconscious after having been attacked by police and had to receive medical treatment. Further arrests were thwarted only by the actions of the crowd. The events took place during a peaceful protest in solidarity with thousands of Palestinian prisoners on hunger-strike, called by various progressive forces in on Palestinian Prisoners Day.


The Glasgow Defence Campaign is in the process of collating witness statements, photos and video footage of the day’s police violence; we have already received material and we urge all our supporters to send us any evidence whatsoever which may be useful for future defence work. Send material to glasgowdefence@yahoo.co.uk as soon as possible.
Initially we would like to place on public record the badge numbers of the following officers, guilty of violent conduct:
A114, A297, A328, A475, A526, A630 (WPC), A654,
V113, V355, V218, V616, V659
The operation was directed under the command of Chief Inspector Fraser Lamb and we believe Inspector Derek Forsyth, with officers from police station.
A supporter of the Glasgow Defence Campaign present at the scene told the campaign: ‘I witnessed clearly constable A475 stamp on people who were sitting on the ground peacefully. I witnessed a black man being knocked to the ground by a police officer who then retreated as he lay unconscious and an ambulance had to be called. It reminded me of the police attack which killed Ian Tomlinson at the G20 in . I saw what happened and then I heard officers lie and say he fell to the ground of his own accord. The police lost it today.’
Defence Campaign and Fight Racism! Fight Imperialism! supporters have gained much experience over the past year in dealing with such police misconduct and acted alongside other groups and individuals to ensure resistance to the police violence and arrests. While one comrade was arrested, protesters sat down and occupied the street for over 30 minutes, successfully defeating police attempts to huckle other targeted activists. We fully salute this resistance.
In identifying the need to defend the right to protest in order to defend , we recently pointed out on this blog the need to hold the police publicly accountable for their abuses of power. Please sign our petition online.
It is absolutely imperative that the lessons of the GDC are learned and implemented: namely, a political defence of all those criminalised for political activity and the need for the police and state prosecutors to be held publicly accountable. We must not allow the state to act with impunity in crushing dissent. Since 2010, the GDC has documented police harassment of FRFI activists, student protestors, progressive football fans and Palestine solidarity campaigners amongst others. We call for the unity of all these forces on this important question. A petition can be signed here in defence of the right to protest.
The GDC has collated a damning dossier of police violence today which we intend to make public as soon as is reasonably possible. We have video footage of the arrest which vindicates the activist targeted and implicates Strathclyde police in yet another politically motivated arrest. We again urge everyone to send us material which may be of use – glasgowdefence@yahoo.co.uk
We send our solidarity to the comrade arrested and call for people to stand together and escalate action both in support of the Palestinian struggle and of those targeted by the police in this country for doing so. The next court picket called by the GDC is due to take place on Friday 27 April, 2pm at the Glasgow District Court on – all progressive forces must attend and make this a show of unity.
Further video footage and photos of today’s violence will be uploaded on this blog in the coming days.
Please share and distribute this statement online and elsewhere.
***The GDC has just received word that the person arrested continues to be held at police station, with supporters outside. Contact the station on
0141 532 3000 to demand his release.***
Statement issued by the PRO,
Defence Campaign,
18 April 01.30 AM 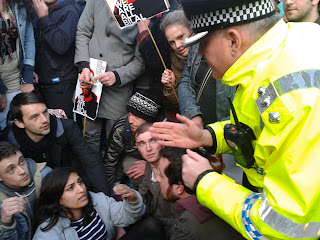 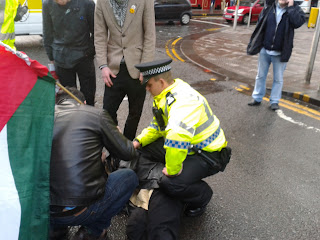 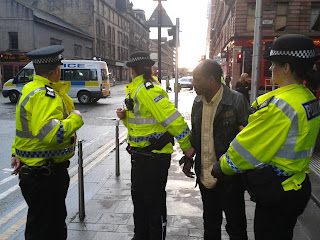