Speaking against ATOS in defence of the sick and disabled is not a crime. Picket Glasgow Sheriff Court 4 March

We are writing to you today to call for your support and solidarity with a student protester in facing criminal proceedings for using a megaphone. We do not believe it is in the public interest to criminalise young people who participate in peaceful protest against the cuts in social welfare. We are demanding that the Lord Advocate intervenes and drops the outstanding charge in the interests of justice.

On , during a peaceful anti-cuts protest in city centre Dominic O’Hara was arrested for using a megaphone under Section 54 of the Civic Government of Scotland Act (1982). Daniel McGarrel was arrested for allegedly attempting to free a person in custody. At court, 10 months after the arrests, the Procurator Fiscal conceded that the original arrests were unlawful and all charges of resisting arrest, police obstruction and attempts to liberate a prisoner from custody were dropped before the trial. However, in a quite incredible decision, the Crown Office decided to pursue prosecution of Dominic for use of a megaphone under the 1982 Act. Maximum penalty for this is a £50 fine, yet to date the case has, we estimate, cost £7,000.

This ‘megaphone’ case is a sign of the times we are living in, and is only one in a long line of police attacks on peaceful protestors over the last three years. The Glasgow Defence Campaign (GDC) was established to oppose this political policing. Our work aims to offer practical, emotional and political support to all those being criminalised for defending our democratic rights in the struggle against the cuts in and across the .

Following the collapse of the original charges Dominic told the GDC: ‘The key question here is freedom of speech for everyone who is trying to organise against the cuts and welfare reform. It’s a fight we can’t lose.’ Daniel added: ‘That the Crown didn’t abandon the megaphone case shows that this is clearly political. The dropping of the charges against myself shows the importance of fighting political charges with a political defence.  I’d like to thank the GDC and supporters who have stood with us throughout the last twelve months.’

We are writing to you today to call for your support and solidarity with Dominic and all those across the country who are facing such criminalisation and demand that the Lord Advocate intervenes and drops the outstanding charge in the interests of justice. . It is vital that all progressive thinkers unite to stop this attack on the right protest.  You can support GDC by:

·         Demand the charge be dropped! Send us a statement of support and solidarity and publish it on your blog or website. Read the statement of solidarity from the renowned writer and working class activist James Kelman on our website. We commend Kelman's consistent and principled stand on this question and urge others to follow his lead.

·         Become a member of GDC. You can support the vital work of GDC by becoming a member of the organisation or sending us a donation (details enclosed).

·         Read further background on this and many others cases of political policing in and across the . See http://glasgowdefencecampaign.blogspot.co.uk

Thank you for your time and for considering joining us in defence of our right to protest.

Standing shoulder to shoulder against the criminalisation of football fans

In 2012 ‘The Offensive Behaviour at Football and Threatening Communications Act’ was passed. Since then Strathclyde Police and now Police Scotland have been using their new power to build cases against football fans. Under the new legislation any action within a football stadium that may cause offence to someone may be treated as a criminal act. Although this sounds absurd, bordering on laughable, this is a very serious issue illustrated by the house raids, arrests and prosecution of Celtic fans who now face the possibility of jail time if found guilty. This should concern any citizens in Scotland who value their right to freedom of speech and right to protest. These rights are something that the working classes have had to struggle for, over hundreds of years, and we should vigorously resist this attempt to erode them.

The Celtic fans facing trial are accused of singing of a song called ‘The Roll of Honour’ which was written by the band The Irish brigade in 1982.  The band have opposed any attempts to slander the song as racist or offensive stating;

‘the roll of honour was written at a time of great social and political upheaval in the North of Ireland. It was to commemorate the sacrifice of ten young men who died in the Hunger Strike of 1981. The song was a reflection of the thoughts, feelings and beliefs, held by many in Ireland and throughout the world who felt that these deaths could have been avoided if the British Government at that time had not taken such a harsh and unbending attitude towards the prison crisis. The line ‘England, you’re a Monster’ is figurative language and is a reference to this belief. The word ‘Monster’ is defined as someone ‘unnaturally cruel’ – the Government at that time. It is not or was not, at any time, to be construed as referring to the English Nation or the people of England, it is not a racist remark’.

In response to the legislation and prosecutions a group called Fans Against Criminalisation has been formed by Celtic supporters to campaign against the criminalisation of football fans. FAC recently held a well organised leafleting session in the area surrounding Celtic park before the match on Saturday 8 February in order to publicise the re-release of ‘The Roll of Honour’ song on iTunes in protest against the prosecutions. On 16 February the single reached number 33 in the official UK top forty singles chart showing that there is widespread opposition to this attempt to criminalise the content of the song and to prosecute Celtic supporters for singing it. 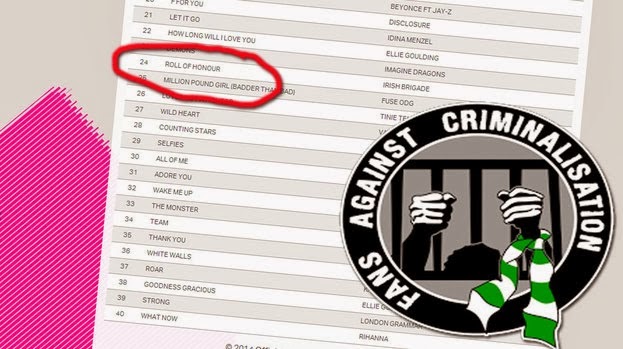 ‘The Roll of Honour’ song is neither racist nor is it sectarian and in fact carries many similarities to the National anthem of Scotland (Flower of Scotland) in its opposition to national oppression and foreign occupation. Up to this point no one has been charged for singing ‘The Flower of Scotland’ nor do we expect them to be. This once again highlights that anti-Irish racism is alive and well in Scottish society; on the street and in the establishment. If you sing a song about Scottish nationalism it’s okay you’re only being patriotic but dare mention Ireland’s politics or nationalism and you’re a criminal. ‘The Roll of Honour is an Irish political song. Under this legislation a potential sentence of up to 5 years imprisonment faces those who sing it in football stadiums.

The Glasgow Defence Campaign calls on everyone to stand shoulder to shoulder against this injustice and we call for organisation and mobilisation against this sectarian legislation. We send our support both to those facing prosecution and to those who are organising in defence of them.

Unity is our key to victory!
All power to the people!

Danny McGarrell
Posted by Miriam at 08:31 No comments: