The gloves are off! The time is now! Get organised or get banned from protesting in your own city centre square! 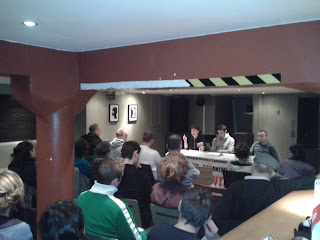 A gathering of Glasgow citizens met last night to discuss how to respond to Glasgow City Council’s attempt to ban protest rights in George Square as part of its redevelopment plan. The meeting was called by the Glasgow Defence Campaign.

Paul Mallon of Fight Racism! Fight Imperialism! drew attention to the lessons of history (the struggle for civil and political rights for the nationalist community in the North of Ireland, the 1980s uprisings of the black community and miners' strike in Britain, the poll tax protests in Glasgow in the 1990s) to further our understanding of the reasons why protest rights are attacked by the state in certain periods while left alone at others. He stated “first they come for the communists and socialists then it is the liberals and then it is broadened out to include much wider sections of society, the German and Italian people saw this concretely when fascism rose not so long ago”.

The following speaker from Spain, who has been researching and in contact with the Spanish Indignados (‘the indignant’) movement, made clear why this is a period where democratic  rights are being attacked across Europe and the world. Mass unemployment, especially of highly educated youth, attacks on public services, yet more and more cuts to the living standards of the people! The ruling class she said ‘are scared!’ of the resistance that must arise out of the misery of the masses – this is why the police repression in Spain and Greece has reached levels reminiscent of that meted out under fascism and the state in Britain have legalised the use of water cannons and rubber bullets against crowds. The use of terrorism legislation against anti-cuts protest in Europe was a clear indication of the process of state criminalisation that is underway. The ruling class are preparing to impose their crisis on the people– peacefully or violently – however they deem necessary. The only solution is to get organised and reclaim the streets!

In the discussion that followed one attendee said that the privatisation of public space was a crucial issue that must be opposed at every step. He applauded the GDC for taking the initiative to call the meeting. A Green councillor went through the council document - http://glasgowdefencecampaign.blogspot.co.uk/2012/10/george-square-right-to-protest-removed.html - outlining the £15m programme of redevelopment planned. She said that unusually but not accidentally the document was only produced to opposition councillors on the morning of a debate held in the city chambers on the issue.  Council documents are usually given two or three days before a debate giving opposition councillors time to go through the details; there was clearly an attempt to thwart opposition to the proposal. One woman named and shamed the wealthy individuals who stand to gain out the redevelopment with contracts. A general consensus was reached; action must be taken and taken quickly!

As for what to do next there were calls for door to door leafleting, letter writing to newspapers, the use of electronic petitions and direct action to raise awareness about, embarrass and expose the council’s plans.
An organising meeting will be held on Tuesday 30 October (details below) with the aim of agreeing concrete plans and dates for action. The GDC is committed to organising against any attacks on our democratic rights and the privatisation of public space in Glasgow. We will work with anyone who shares these aims, and will work to build effective unity and opposition on the ground.

Hands off George Square!
Defend the right to protest!
Oppose the cuts!
Solidarity with the peoples fighting back in Europe and around the world!

All welcome – bring ideas for protest, performance, publicity, petitions and anything else!
Posted by Miriam at 04:50