Crown case collapses but fight not over: defending the right to act against ATOS 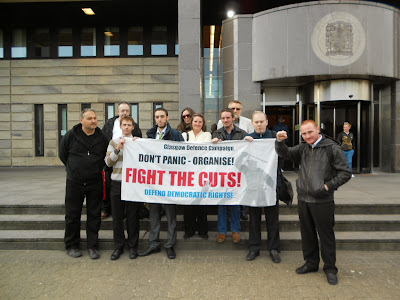 The Glasgow Defence Campaign welcomes yesterday’s victory for two activists arrested in February on an anti-ATOS protest in Glasgow for using a megaphone, as the Crown case all but collapsed. Supporters gathered on the steps of the Sheriff Court to demand ‘No harassment, no arrest! Defend the right to protest!’ and an end to the brutal attacks on the rights of sick and disabled people through companies like ATOS.

The Procurator Fiscal conceded that the original arrests of Dominic O’Hara and Daniel McGarrell – both supporters of Fight Racism! Fight Imperialism! – were unlawful and charges of resisting arrest, police obstruction and attempts to liberate a prisoner from custody were all dropped before the trial. However, in a quite incredible decision, the Crown Office has decided to continue pursuing Dominic through the courts for use of a megaphone under Section 54 of the Civic Government of Scotland Act (1982), setting the next trial date for 6 January 2014.

Dominic told the GDC: ‘The key question here is freedom of speech for everyone who is trying to organise against the cuts and welfare reform. It’s a fight we can’t lose.’ Daniel added: ‘That the Crown didn’t abandon the case today shows that this is clearly political. The dropping of the charges against myself shows the importance of fighting political charges with a political defence. Imagine if I’d plead guilty? I’d like to thank the GDC and those supporters who have stood with us throughout the last seven months.’

To be clear: on 22 February 2013, dozens of Strathclyde police officers on foot, bikes, cars and vans were mobilised to intentionally disrupt a peaceful protest against ATOS in Glasgow city centre. Police proceeded to violently arrest two activists for using a megaphone under Section 54 of the Civic Government of Scotland Act, which the officers must have known carries no power of arrest. The activists were therefore unlawfully arrested and incarcerated in the cells of Stewart Street police office for several hours before being charged with resisting arrest and police obstruction. Three weeks later, Daniel McGarrell was contacted by what was subsequently confirmed by solicitors to be an undercover police officer who issued him with threats and attempted to recruit him as an informer. The Crown Office has admitted that the original arrests were indeed unlawful but will now spend at least one year in the courts attempting to pursue an activist for exercising free speech in the course of a peaceful protest.

The Coalition government, with the support of the Labour opposition, is undertaking an unprecedented attack on the living standards of a whole generation, dismantling the welfare state and criminalising the poor, the young and the unemployed on a massive scale. The most vicious aspect of this historic process has been the degrading and deadly attacks on the rights and dignity of sick and disabled people, thousands of whom have died after going through the notorious Work Capability Assessments run by ATOS. The case of the Glasgow Against ATOS 2 shows that all those who seek to organise effective opposition to these policies, whether legal, peaceful or otherwise, will need to actively fight for their right to do so. The battle to defend freedom of speech is one and the same as the fight against ATOS, unemployment and inequality.

The Glasgow Defence Campaign asks that all progressive individuals and organisations join with us in demanding that the remaining charge against the Glasgow Against ATOS 2 be dropped immediately, and that freedom of speech is respected. We will be pursuing compensation from Police Scotland and demanding answers directly from Chief Constable Stephen House and the office of the Procurator Fiscal. Send messages of support to glasgowdefence@gmail.com and stand with us on the streets. An injury to one is an injury to all!