Admonished for using a megaphone

Today in Glasgow Sheriff Court a campaigner in defence of disability rights received a sentence of admonishment (no fine to be imposed) for being found guilty of the criminal offence of using a megaphone during an anti-cuts protest on 22 February 2013. 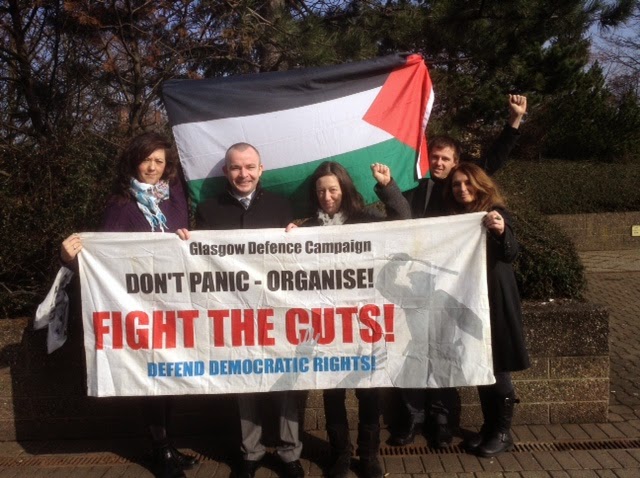 Dominic O’Hara, a supporter of Fight Racism! Fight Imperialism! was arrested alongside another FRFI supporter on the then monthly demonstrations against ATOS and the cuts to living standards. The two activists were arrested amidst a targeted police operation to close down the moving pickets campaigner’s used to highlight the reality of welfare cuts; around 50 Strathclyde police officers on foot, bike, police cars and vans, together with Community Safety CCTV vehicles, were mobilised in a planned operation against a demonstration of 20 people, under the direction of Inspector Muir at Stewart Street police station (A-division).
The original report we published as our comrades were in custody can be read here http://glasgowdefencecampaign.blogspot.co.uk/2013/02/two-arrests-on-peaceful-glasgow-against.html
In the days and weeks which followed, the intentions of Strathclyde Police became clearer. One of those arrested was targeted by Special Branch, who attempted to recruit him as an informer. Charges against this comrade were eventually dropped by the Crown Office following the comrades public rebuttal of the police attempts to recruit him. Further secret manoeuvres took place in order to demobilise the Glasgow Campaign Against ATOS, which FRFI were instrumental in establishing and expanding. FRFI activists were smeared; the age old tactic of divide and rule was deployed which effectively destroyed the campaign.
http://glasgowdefencecampaign.blogspot.co.uk/2013/03/strathclyde-police-attempt-to-divide.html
On 19 March last year Dominic O’Hara was found not guilty of police assault and found guilty of the megaphone contravention. The original report we published last year is available here. http://glasgowdefencecampaign.blogspot.co.uk/2014_03_01_archive.html
The GDC would like to thank our supporters who stood with us throughout the duration of the past 25 months of this case. We have learned an enormous amount throughout the course of this time. We noted the class nature of justice in this country, we noted how time and time again in periods of crisis the police are allowed to move beyond the limits of the law to destroy and demobilise effective protest. But we also learned how we can resist and who our allies are. We repeat; political charges must be met with a political defence. We repeat; if Dominic O’Hara is a criminal for speaking out in defence of the disabled then we are guilty one and all and proud to be guilty. For speaking out against injustice is a right we are prepared to fight for. We refuse to submit.
Miriam Kelly
PRO Glasgow Defence Campaign
Posted by Miriam at 14:15