The Glasgow Defence Campaign is reproducing a statement from members of the 32 County Sovereignty Movement (32CSM) based in Britain, The Gaughan/Stagg Cumann, following the mass detention of their members at English and Scottish ports on the evening of 27 and morning of 28 May 2012. The GDC sends solidarity to the comrades and would like to state our opposition to this harassment, the ongoing abuse and imprisonment of Irish Republicans, such as Marian Price, and indeed the British Imperialist occupation of the North of Ireland itself. 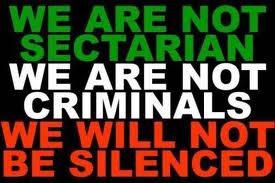 The Gaughan/Stagg Cumann condemn the mass arrest of its members, while traveling back from Belfast for the Free Marian Price march. The arrest covered ports in England and Scotland in what was a planned operation involving in excess of fifteen security officers which included MI5.
Our members were approached by officers who identified themselves as Special Branch and M15; some members were detained from three to eight hours. Two members were subject to cavity searches; all were asked questions about the 32CSM in England and the names of members. Some members were presented with historical information regarding their contact with Irish POW’s in an attempt to give the illusion of an investigation into that person’s background. Our members have been issued with the details of legal representatives to record this blatant harassment and protect themselves against any further unwanted approaches. Republicans and their families should remain vigilant given the resources that the British state are willing to deploy.

The Gaughan/Stagg Cumann condemn this incident and would like to state that these dirty tactics adopted by the British security services will not deter us in Scotland, England, Ireland or anywhere else for that matter from highlighting the plight of Republican prisoners. We will continue our campaign to promote our lawful, peaceful challenge to Britain’s ongoing denial of Irish National Sovereignty.

We also urge all Cumann to report these approaches to their Cumann and a legal representative.