Save Our Square! Second meeting on George Square

Much to be done with little time to do it! This was the message which dominated the second meeting of the Glasgow Defence Campaign in opposition to the privatisation of George Square and remaining threats to limit protest in the city. 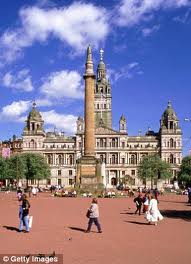 On Monday 12 November, a panel will be selecting the winner of a design competition for the square, with a rapid schedule of ‘redevelopment’ in place thereafter. The council itself has admitted that such development will potentially shut off the square to the public for two years. It is now or never to ‘save our square’!
Those judging the competition include head of Glasgow City Council, Labour’s Gordon Matheson; T in the Park promoter, Geoff Ellis; and as an observer, the architect Neil Baxter, who was an advisor to notorious Glasgow businessman Stefan King in ill-fated attempts to turn the Botanic Gardens into a night club. A motley collection of rogues indeed! It is clear that any winning design will have self-interest and profit, rather than the public, at heart.
A list of actions were agreed by the meeting as a starting point for opposition. Our next campaign meeting will be Tuesday 13 November. Details below.
Saturday 10 November, 1-3pm, Glasgow Defence Campaign Rally ‘SOS - Save Our Square!’ Donald Dewar Statue, Top of Buchanan Street , City Centre. Help campaigners hand out leaflets and spread awareness amongst the public.
Monday 12 November, proposal to picket the Design Competition judgement; contact the campaign for details.
Tuesday 13 November, Glasgow Defence Campaign ‘Save Our Square!’ organising meeting, 7.30-9.30pm, Downstairs in Bar Bacchus, 80 Glassford Street, Glasgow G1 1UR
Wednesday 14 November, Coalition Of Resistance rally in George Square in solidarity with the general strikes in Spain, Greece and Portugal. The Glasgow Defence Campaign will be joining those assembled for a period between 12noon-6pm. Contact the campaign for more details.
Saturday 1 December, 1-3pm, RIP George Square protest, Assemble Donald Dewar Statue, Top of Buchanan Street, City Centre. Join the Glasgow Defence Campaign dressed as councillors (suited and booted) to save George Square from the death being planned by the Council. Cardboard casket to be dumped at front of City Chambers at end of protest.
Sieze the time!
Spread the word!
Save our square!
Posted by Miriam at 14:06