Anniversary Picket of 'Glasgow Against Atos 2' Trial To Go Ahead. Stand with us

The adjournment of Tuesday’s ‘megaphone’ trial against one of the ‘Glasgow Against Atos 2’ means the case will have gone on for over a year before its concluded. It has been rescheduled for 4 March. Against the cold winds blowing round Glasgow sheriff court supporters once again mobilised to demand the political charge of ‘using a megaphone’ was dropped. Spokesperson for the Glasgow Defence Campaign Miriam Kelly commented; 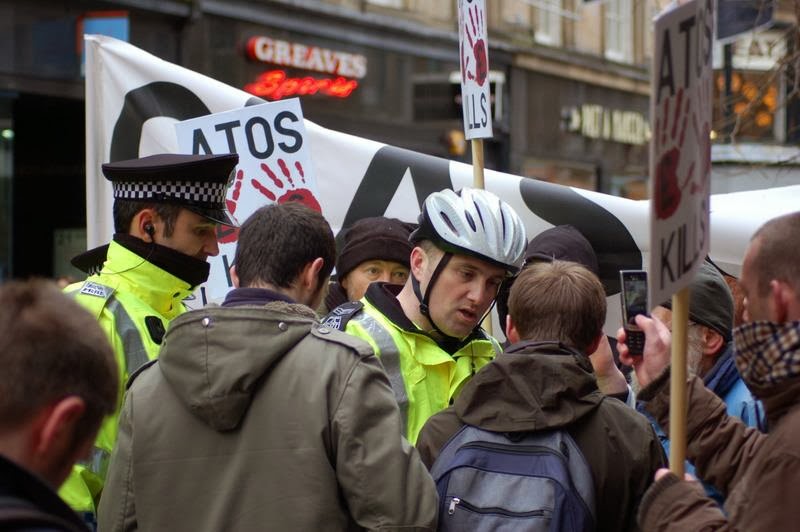 ‘An undeclared war on the poor is underway. We see this in job centre sanctions and with Atos rulings declaring sick and disabled people fit for work. We also see it in courts with working class people evicted from their homes because they can’t afford rent payments. This ‘megaphone’ case is also a sign of the times were living in. History tells us that attacks on the poor are accompanied by an attack on the right of free speech and other basic democratic rights which allow the poor and oppressed to organise to defend themselves. We will take the lessons of the past and continue our work to support those people being criminalised for fighting the cuts. The best defence we can have is our unity against what is happening.’


Join us for an anniversary picket of Glasgow Sheriff Court. Bring pots, pans, whistles, banners and voices to let the police and courts know they won’t silence us.


For the background of the case see
http://glasgowdefencecampaign.blogspot.co.uk/2014/01/megaphone-trial-begins-in-glasgow.html

And a protest song penned by one of the ‘Glasgow Against Atos 2’
‘We’ve No Even Started! Fight The Cuts! Defend Free Speech!’
https://soundcloud.com/the-wee-man-1/weve-no-even-started-fight-the
Posted by Miriam at 02:31