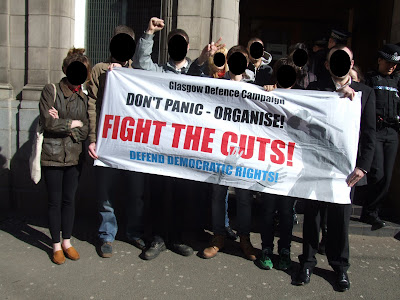 On Friday 18 March, the Glasgow Defence Campaign held a protest outside Glasgow's Justice of the Peace Court (District Court) on St. Andrews Street. Over a dozen supporters gathered in solidarity with a Fight Racism! Fight Imperialism! activist appearing in court in relation to his arrest on student protests on 9 December. Eight police witnesses were present at court for the trial. However, the prosecution once again failed to produce crucial CCTV evidence, which could prove the defendant innocent. The Crown has now failed to produce this evidence on three occasions, and the trial was once again adjourned until 6 June.
The Glasgow Defence Campaign is committed to supporting all those facing arrest and trial by Strathclyde police for fighting against the attacks on communities and public services by the Tory government and Labour council. The GDC will be expanding organisation and protest against political policing and in solidarity with all those facing trial in Glasgow in the coming months. Already, one prosecution case has collapsed against an anti-cuts activist for selling a political newspaper. We are confident that those facing trial in the coming months for political activity will also emerge victorious.
Posted by Miriam at 17:16