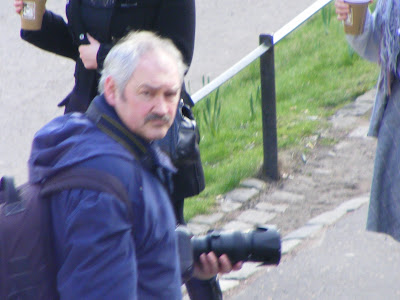 Supporters of Fight Racism! Fight Imperialism! have passed on the above picture of a photographer who we believe to be working for Lothian and Borders police. This is an appeal for information as to his identity and any further activities he has carried out.
He was pictured leaving the scene after he was rumbled carrying out surveillance on demonstrators who had gathered at the Mound in Edinburgh on Saturday 5 March 2011 in support of the revolutions in the Middle East and North Africa. It was a peaceful static assembly with a low uniformed police presence. The pig was taking head shots of individuals on the protest. Activists from FRFI report that a number of covert officers were in attendance attempting to mingle and take part in the protest. Please pass on any further information against this officer to the email address on this site.
Posted by Miriam at 10:42