Victory for the Glasgow Defence Campaign! 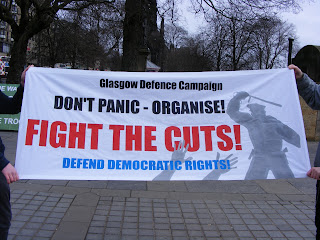 Police attempt to ban Fight Racism! Fight Imperialism! collapses
On 11 March, we learned that the case against a supporter of Fight Racism! Fight Imperialism! had been dropped as it was about to go to trial. The Glasgow Defence Campaign today welcomes this as a significant victory for all those concerned with free speech and the right to political protest. The case demonstrated the need for open campaigning in order to assert our democratic rights in the face of state harassment. The activist is now pursuing a complaint against Strathclyde police and the officers concerned.
The case was due to go to trial on 14 March, following a notification of criminal proceedings being issued on 30 December 2010. The activist was charged with illegal street trading under the Civic Government Scotland Act 1982 for selling the newspaper Fight Racism! Fight Imperialism! in Govanhill, Glasgow on 7 August 2010. He became the third FRFI seller to be targeted and charged as the police sought to impose a ban on the newspaper amidst a summer-long period of harassment from Strathclyde police officers operating out of New Gorbals police station. The cases against the other two  activists were dropped within weeks by state prosecutors.
Miriam Kelly, a spokesperson for the Glasgow Defence Campaign stated, ‘We welcome this as a victory, for us and for everyone in Glasgow and elsewhere who faces criminalisation for legitimate political activity. We have openly defied the police ban on Fight Racism! Fight Imperialism! by continuing to sell the newspaper on the streets in full view of the police. We have stated throughout that it is not criminal to oppose the cuts and attacks on living standards, it is not a crime to oppose British imperialism’s activities at home or abroad. It is the police who have acted unlawfully and in an openly political manner.’
Dropping the case prior to the trial stage has prevented the police having to perjure themselves in court. Officers O’Donnell and Weir in the summary of written evidence made a number of accusations they know to be untrue in a bid to further implicate our supporters and bring this prosecution. The Glasgow Defence Campaign would like to take this opportunity to state that we will not stand idle in the face of attacks by the police, reactionary elements or state prosecutors. We pledge to fight on and defend all those who face criminalisation for political activity. We would also like to thank our supporters and legal advisers for their support, encouragement and work.
All power to the people!
Glasgow Defence Campaign PRO
11 March 2011
Glasgow, Scotland
Posted by Miriam at 09:45