Campaign meeting: No to political cops! Fight the cuts!
Wednesday 20 April, 7.30 - 9.30pm
Langside Halls, 1 Langside Avenue (Shawlands)
Glasgow
This open Glasgow Defence Campaign meeting follows on from a week of further arrests of anti-cuts activists and a successful rally of 60 people in Glasgow city centre to demand an end to political policing.

We invite everyone concerned with fighting the cuts and standing up to police intimidation to attend this meeting to collectively discuss, plan and organise how we can resist! Introductions will be given by activists at the sharp end of Strathclyde police's campaign of harassment and also a brief background to recent developments in the policing of dissent. 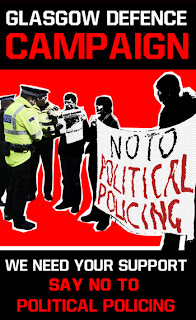 We cannot be complacent. The coming period will be one of mass struggles against the brutal realities of the cuts. It is essential that we are able to successfully defeat any attempts to destroy this movement before it has even begun. The draconian bail conditions placed on activists - banning them from 'gathering with two or more people for the purposes of a demonstration' - shows this is already beginning.
Important victories are already being won in Glasgow. Wider and wider layers of people are being radicalised and uniting against these attacks on democratic rights. Come along - stand up for your rights!
All welcome.
Posted by Miriam at 17:03